Little Suhana Khan, Ananya Panday and Shanaya Kapoor Are The Answer To Your Throwback Cravings 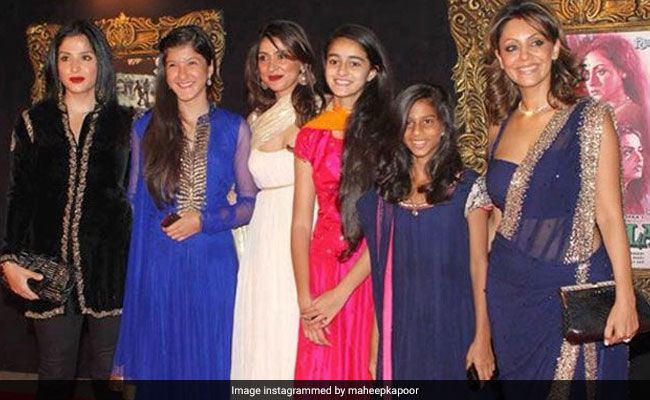 Our Thursday couldn't get any better as we chanced upon a million-dollar throwback picture that features Bollywood BFFs. From Shah Rukh Khan's daughter Suhana and Chunky Panday's actress daughter Ananya to Sanjay Kapoor's daughter Shanaya, the picture features the besties in a single frame. In the blast from the past, Ananya, Suhana and Shanaya can be seen posing with their mothers Gauri Khan, Maheep Kapoor and Bhavana Panday. The throwback photo, that is going crazy viral on social media, was shared by Maheep Kapoor on her Instagram profile on Thursday. Sharing the photo, Maheep captioned it: "Time flies." Take a look:

Reacting to the picture, Ananya Panday commented: "It really does. Too adorable." Even Shilpa Shetty's husband Raj Kundra and Bhavana Panday's close friend Neelam Kothari dropped comments such as "How adorable" and "Next gen."

Ananya Panday, Suhana Khan and Shanaya Kapoor share a deep bond with each other. The trio always seem to be having a great time together. Ananya Panday, who refers to her gang as "Charlie's Angels," frequently gives us glimpses of their friendship. Ananya made her debut in Bollywood with Student Of The Year 2 while Shanaya has started her career in the film industry as an assistant director. Suhana, on the other hand, is currently studying films in New York Universty.

On the work front, Ananya is preparing for her second film Pati Patni Aur Woh, which also stars Kartik Aaryan and Bhumi Pednekar.

Ebrahim Alkazi Dies At 94: Nawazuddin Siddiqui And Others Pay Tribute To The "Architect Of The Modern Indian Theatre"