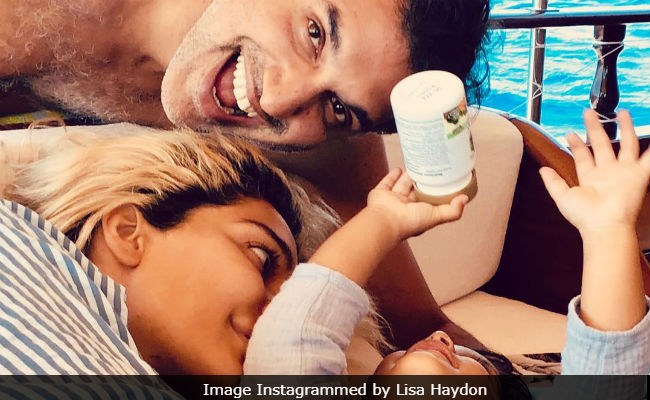 Lisa Haydon's latest Instagram post featuring her entrepreneur husband Dino Lalvani and her little munchkin Zack Lalvani, is making the Internet happy, once again. The Shaukeens actress, who is currently vacationing by the sea, shared an adorable picture on Thursday. In the picture, Lisa can be seen admiring her little one as he amusingly stares at a box while Dino poses for the camera. Lisa captioned the post: "My boys." Needless to say, Lisa's Instafam was delighted to see the picture and several comments such as "cuteness overloaded" and "cutest picture ever" were seen on the post. "What a lovely family," read another comment.

Lisa, who gave birth to Zack in May last year, has been actively posting pictures of her little one on social media. A few days back the Queen actress shared a video, in which Zack could be seen playing with a ball. Lisa captioned the post: "Dribbling at 14 months. Proud mama." The picture garnered lots of love from the actress' Instafam and over 1 lakh likes.

This is the video we are talking about.

Lisa Haydon never fails to make a statement with her pictures. The 32-year-old actress frequently shares posts pertaining to motherhood. Take a look at some of her pictures here:

On her son's first birthday in May this year, Lisa shared a picture along with an emotional note on Instagram. "Motherhood can be testing but it's the Love that has made the last year so magic," read an excerpt from the post.

In other news.. my baby turned one on the 17th. Felt so emotional reminiscing a year ago when he was born- 7:57am. We wake up at 6 most mornings and Zack sleeps till 8am.. I know right, what baby actually sleeps later than their parents so we waited patiently with our coffees, remembering this time last year , contractions , hospital , the whole family cheering 'PUSH' like a football team ... then we pounced 7:57 sharp with the 'Happy Birthday' song. Motherhood can be testing but it's the Love that has made the last year so magic.

Lisa Haydon married entrepreneur Dino Lalvani in Goa in 2016. The actress made her Bollywood debut in the 2010 film Aisha co-starring Sonam Kapoor.