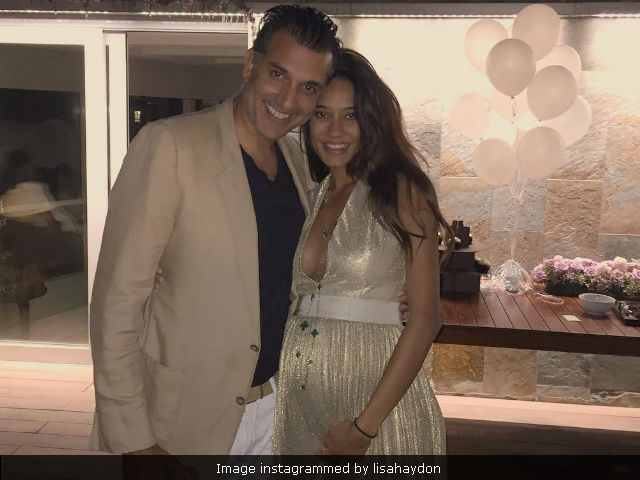 New Delhi: Bollywood actress Lisa Haydon, who is pregnant with her first child, was one of the topped the trends list on International Woman's Day on Tuesday. Lisa, 30, shared a picture on Instagram, focusing on her baby bump and the Internet loves it - the picture has been like more than 45, 000 times in some 16 hours. Lisa Haydon, dressed in a white sheer dress, caressed her baby bump with a curious expression. Lisa Haydon married UK-based entrepreneur Dino Lalvani, in November last year. Two months later, The Shaukeens actress announced her pregnancy with a picture of her baby bump on Instagram.

In an earlier interview to news agency IANS, Lisa Haydon said she doesn't want to be 'termed as hot.' She said: "It was getting offensive after a point. Who wants to be hot?"

Meanwhile, this is the picture with which Lisa Haydon announced her pregnancy in January:

Lisa Haydon recently made headline after she went on an all-girls holiday in Goa and shared some stunning pictures:

Promoted
Listen to the latest songs, only on JioSaavn.com
Lisa Haydon debuted in Bollywood in 2010 film Aisha and went on to star in films like Rascals and Santa Banta Pvt Ltd. She famously played Kangana Ranaut's acquaintance Vijaylaxmi in Queen. She had a small but pivotal role in the film's story graph. She was last seen in Karan Johar's Ae Dil Hai Mushkil. She played Ranbir Kapoor's onscreen girlfriend, who later hooked up with Anushka Sharma's onscreen fiance played by Imran Abbas.

Lisa Haydon and Dino Lalvani's wedding ceremony was held in Goa. It was a strictly friend and family event.