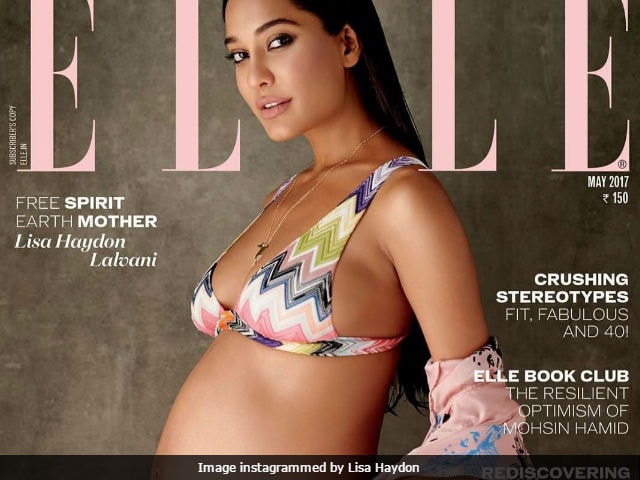 New Delhi: Actress Lisa Haydon, who is pregnant with her first child, covered the latest issue of Elle Magazine. The actress Instagrammed the cover image and said it's her "favourite cover till date." Elle reciprocated saying: "We dare say this is our favourite @lisahaydon cover yet." Lisa Haydon, 30, is married to UK-based entrepreneur Dino Lalvani. The Queen actress captioned the picture: "Morphing into the most exciting shape of my life!! This is my favourite cover till date because my (baby) made it on as well." The issue featuring Lisa Haydonon cover talks about body issues and labelled the actress as "Free Spirit, Earth Mother."

Thank you team Elle for putting me on your body issue cover.. morphing into the most exciting shape of my life!! This is my favourite cover till date because my made it on as well. So many fun memories with you guys @malini_banerji @elleindiaofficial @farrokhchothia @namratasoni #thebodyissue #andthenwestretch

Last year, model Carol Gracias walked the ramp at the Lakme Fashion week while she was pregnant. Sabyasachi appointed actress Kareena Kapoor Khan as their showstopper in August 2016, four months before she gave birth to her son Taimur Ali Khan Pataudi. Kareena also returned to the ramp for Anita Dongre 45 days after Taimur's birth.

It seems Lisa Haydon is keeping up with the trend.

Promoted
Listen to the latest songs, only on JioSaavn.com
Lisa Haydon started her journey in Bollywood with 2010 film Aisha, co-starring Sonam Kapoor and Abhay Deol. She later starred in Rascals and received critical acclaim for her role in Vikas Bahl's Queen with Kangana Ranaut. She is also known for her role in films like The Shaukeens, Santa Banta Pvt Ltd and Housefull 3. Lisa Haydon was last seen in a cameo in Karan Johar's Ae Dil Hai Mushkil co-starring Ranbir Kapoor and Anushka Sharma.