Lipstick Under My Burkha Typifies What's Wrong With Feminist Movement 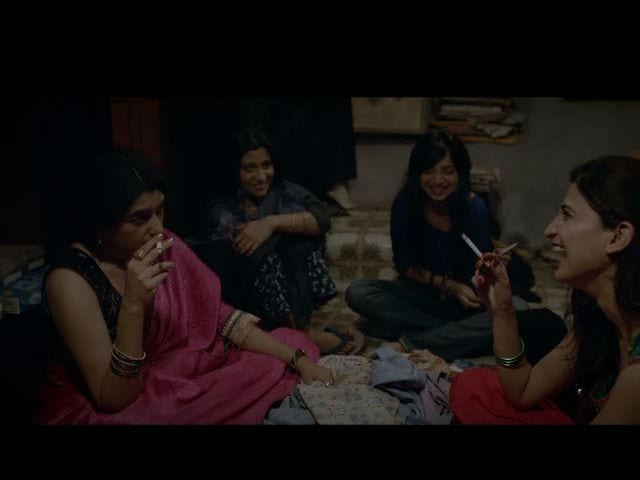 A still from Lipstick Under My Burkha

Mumbai: The trailer of Alankrita Shrivastava's film, very strategically and with thesis-like precision gives us four women from different age groups who just want to throw it -- the burkha -- off and breathe easy.

The burkha is of course a metaphor. And one that Germaine Greer would have grabbed at greedily 30 years ago. Today, 'throwing off the burkha' hardly seems revolutionary, let alone exciting as an idea for a movie. Lately, Leena Yadav got three rural Rajasthani women together in Parched to discuss, ahem, sex and other forbidden pleasures even as back home men continued to brutalize them.

In Parched, Tannishtha Chatterjee had a secret admirer who called himself 'Shah Rukh Khan'. In Lipstick Under My Burkha, Ratna Pathak Shah has a much younger man lusting for her on the phone. Maybe both women attended the same 'naari bachao' class.

Lipstick Under My Burkha -- of what it seems from the trailer -- deviates from the pseudo-feminist norm of throwing off the burkha -- a variation on Kaanton se kheench key yeh aanchal -- where the woman must break the barriers of the stifling patriarchal system to be free in one detail. The men seem rather nice and gentle here. They never are in such films.

But here we have the very talented Vikrant Massey being kind, very kind -- in bed to Ahana Kumra who was last seen playing Amitabh Bachchan's daughter in the failed serial Yudh. We see Sushant Singh (not Rajput) smiling benevolently at another female protagonist, and so on.

What a relief! A chick flick where the men are actually not jerks.

Make no mistake. Lipstick Under My Burkha is a full-blown chick flick serving up all the cliches of the genre and blissfully ticking all the boxes one by one. There are four women from different generations lunging for some solid tumble in the hay with strangers.

Ratna Pathak Shah (50 plus), Konkona Sen Sharma (30 plus), Ahana Kumra (20 plus) and Plabita Borthakur (20-minus) are all in the mood to throw caution to the winds, surreptitiously buy and use lipstick (still taboo in several conservative societies), discuss condoms with their partners and with their gal pals, and have a smoke with the gal pals when the lights are out.

So put up your feet, all you fans of Chetan Bhagat's brand of designer-feminism. Lipstick Under My Burkha promises to give the New Indian Woman a new look under the burkha (or the dupatta or the ghoonghat). As soon she throws of the burkha and smears lip gloss, she is ready for the kill.