Suhana Khan is reportedly shooting for a short film 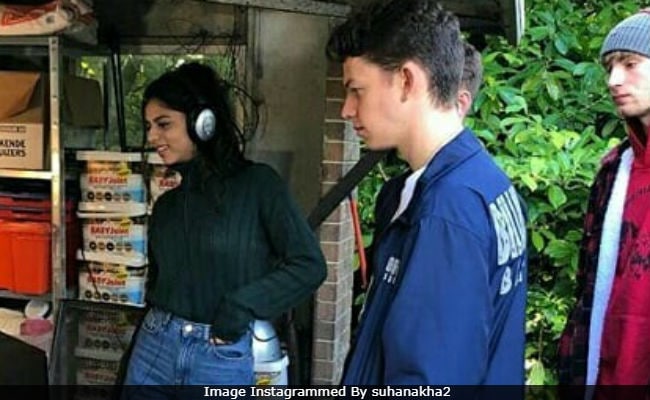 Suhana Khan has previously talked about her dream of becoming an actor (Image courtesy: Instagram)

Pictures of Shah Rukh Khan and Gauri Khan's daughter Suhana, reportedly shooting for a short film, are going viral. The pictures have been shared by various fan clubs of Suhana on Instagram, which feature her sitting inside a car for a shoot sequence. Suhana is dressed in a green top and a pair of flared jeans. "Shoot for a short film," read the caption. Suhana, who studies in London, has previously talked about her dream of becoming an actor. In her interview to Vogue (she was on the cover of the magazine's August edition), Suhana said, "I don't think there was any one moment when I decided. Since I was young, I'd do all these accents and impressions. But my parents only realised I was serious about acting when they saw a performance of mine for the first time. I was playing Miranda in a school performance of The Tempest."

Here are the pictures from Suhana's shoot. (It appears to be for a college assignment).

Suhana with new project. Shoot for short movie so excited and can't wait for this short movie

Last week, SRK flew to London to watch Suhana's play, in which she played Juliet. On Instagram, he shared a picture of himself with Suhana and a cut-out from the poster of the play. "With my Juliet in London. What a wonderful experience and exceptional performances by the whole cast. Congratulations to the whole team," the 53-year-old actor wrote.

On the work front Shah Rukh Khan is currently awaiting the release of Zero, his film with Katrina Kaif and Anushka Sharma. Zero, directed by Aanand L Rai, releases on December 21.