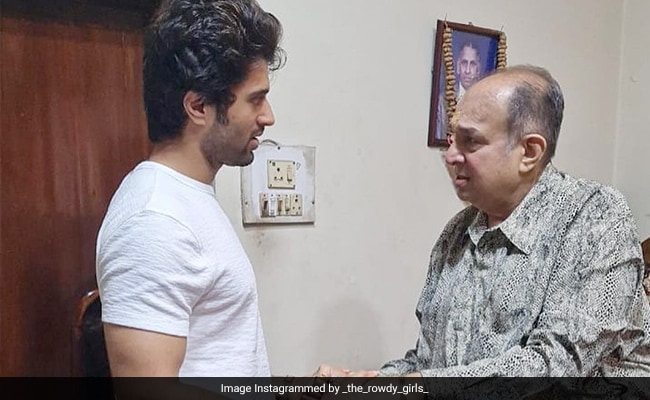 Vijay Deverakonda recently met Manoj Desai, the executive director of Gaiety Galaxy and Maratha Mandir Cinema. A few days ago, Manoj Desai called the actor "arrogant" for his comments during the promotions of his recently released movie Liger, co-starring Ananya Panday. The actor said, "kaun rokenge dekh lenge (who will stop, we will see)" reacting to the boycott trend. Now, the actor met Manoj Desai and the pictures from their meeting are going viral on the Internet.

In the first image, Vijay Deverakonda, in a white t-shirt and cargo pants, is holding Manoj Desai's hands. In the next, Liger actor can be seen touching Manoj Desai's feet and taking the blessing. A fan page shared the photos on Instagram and in the captions wrote, "Vijay Deverakonda meets Manoj Desai over misunderstood boycott statement and proves why he's the common man's superstar". Soon after the post was shared, a fan commented, "God bless him".

During an interview with the news agency ANI, Vijay Deverakonda reacted to the boycott trends on his film. He said, "We've put our heart into making this film. And I believe that I am correct. I feel that there is no room for fear, when I had nothing, I didn't fear, and now after having achieved something, I don't think there needs to be any fear even now. Maa ka aashirwaad hai, Logon ka pyaar hai, Bhagwaan ka haath hai, andar aag hai, Kaun rokenge dekh lenge (We have mother's blessings, people's love, God's support, a fire inside us, we will see who will stop us)!"

Reacting to Vijay Deverakonda's comment, Manoj Desai in an interview with Filmi Fever said, "Mr Vijay, it appears that you have grown arrogant; have you not seen the impact of 'Watch the movie or if you don't desire to then don't watch'? Just look at what Taapsee Pannu, Aamir Khan and Akshay Kumar's recent films going through. He added, "Why don't you work in OTT? Work in good serials in Tamil, Telugu, and OTT platforms, and leave the theatre. Vinaash kaale vipareet buddhi (when the time of destruction inches closer, the mind stops working), and you are doing that. I had great hopes for the movie, but such statements have harsh impacts. Don't pay attention to hashtags."