Life Isn't Perfect But For Sussanne Khan, This One Thing Can Be 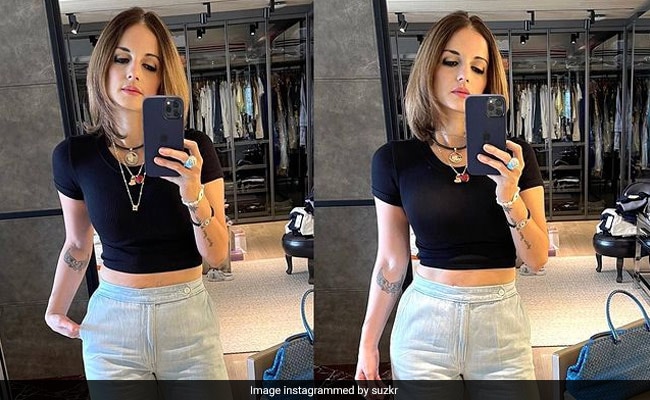 Sussane Khan is a woman of many talents. When she is not busy with interior designing and running her apparel business, she is treating her social media followers to videos of cooking and singing. What shines through all of the 42-year-old's endeavours is her positivity and zest for life. We got yet another glimpse of this in her latest Instagram upload. The picture, which is a stunning full-length mirror selfie, features Sussanne in a black crop top, white linen pants and a bunch of layered necklaces. While we won't stop you from jotting down some fashion tips, we recommend that you pay attention to the caption. Along with the photo, she wrote, “Life isn't perfect.. but your outfit can be.” Just the right attitude to keep up on a rough day, isn't it? She perfectly summed up the mood of the post with hashtags such as “dress for yourself” and “let's keep it authentic”, among others. Fans fell in love with Sussanne's photo as well as her outlook towards life. One user said, “Caption is spot on,” while another wrote, “Fab one.”

Earlier in the month, Sussanne flaunted her baking skills in Instagram Reels. “Working with your hands is like rejuvenation for your soul,” she wrote in the caption space. The cake looks absolutely delicious, causing former VJ Maria Goretti to write, “I want a slice,” in the comment section.

The designer, who was formerly married to actor Hrithik Roshan, often shares pictures of her sons, Hrehaan and Hridhaan. She recently posted a photo of herself and her son watching the sunset. Sharing the image, she wrote, “Sunset Twinning.” Sussanne's friend and actress Malaika Arora commented on the photo, saying, “Beautiful.” Actress Sonal Chauhan echoed a similar sentiment and wrote, “Such a beautiful picture.”

Sussanne is the daughter of actor Sanjay Khan. She married Hrithik Roshan in 2000, after four years of courtship. The couple ended their relationship after over a decade and obtained a divorce in 2014.

Dial 100 Trailer: It's Manoj Bajpayee Vs Neena Gupta In Race Against Time