Not only Tabu and Parineeti, but Neil is also part of a the Golmaal family now 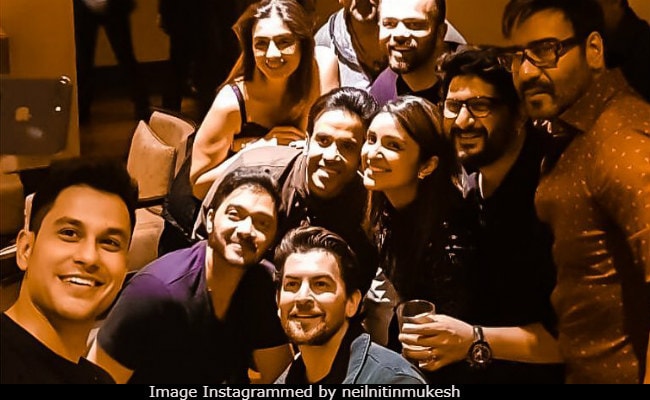 New Delhi: Tabu and Parineeti Chopra, the new entries to Team Golmaal were the stars of this party. Team Golmaal Again scored a century at the box office in just four days and continues its brilliant run at the theatres. And this means it's party time for the Golmaal folks - Ajay Devgn, Arshad Warsi, Tusshar Kapoor and Kunal Kemmu let their hair down at a celebratory party recently and joining them was Neil Nitin Mukesh, who plays one of the antagonists in the movie. Not only Tabu and Parineeti, but Neil is also part of a new family now: "This is family. The GOLMAAL family. Celebrating HAPPINESS. Thanks to all of you," he wrote on Instagram.

Here's how a night full of Golmaal looks like:

This is family. The GOLMAAL family. Celebrating HAPPINESS. Thanks to all of you.

It appears that the co-stars doesn't want to believe that the shoots are over and the movie is already at the theatres - they continue to hang out together at get together and dinners with the director in tow, of course. Here are a few glimpses.

On the Friday following Diwali, Golmaal Again released to a blockbuster opening score of 30 crores and needed just three more days at the theatres to fetch the 100 crore bounty. Evaluating the movie's box office performance, trade analyst Taran Adarsh says: "Golmaal Again continues to collect in double digits." Rohit Shetty's movie is expected to close the week with as many as 135 crores.

Promoted
Listen to the latest songs, only on JioSaavn.com
Golmaal Again opened to middling reviews with more and more cine-goers having signed up for the Golmaal franchise fan club. One of them is Ajay Devgn's seven-year-old son Yug, who got his superstar father to host yet another screening of the movie in Mumbai on Thursday.

Golmaal Again is the fourth in the Golmaal series of movies. Rohit Shetty's much-loved comedy series of films debuted in 2006 with Golmaal and continues with the new one. In between, he added Golmaal Returns (2008) and Golmaal 3 to the series. This also marks Ajay Devgn's tenth collaboration with Rohit Shetty.