Laxmii: Ahead Of The Film's Release, Director Raghava Lawrence Writes A Note For Akshay Kumar. His Reply Is Equally Sweet

"Neither making this film nor doing this role was possible without you," wrote Akshay for the director 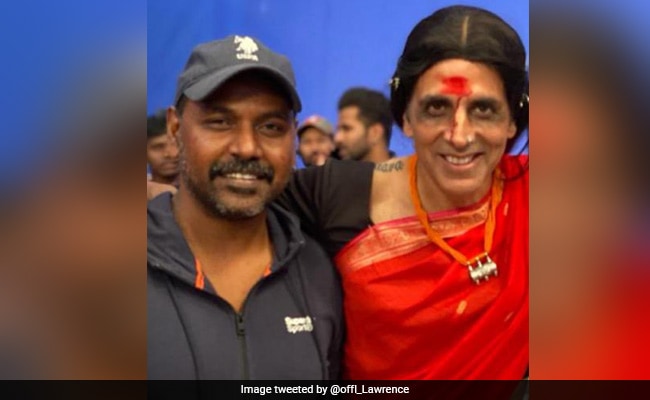 Raghava Lawrence shared this photo from the sets of Laxmii. (Image courtesy: offl_Lawrence)

Ahead of the release of his new film Laxmii, actor Akshay Kumar wrote a heartfelt note for director Raghava Lawrence on Monday. Laxmii will premiere on Disney+Hotstar at 7:05 pm today. Akshay's special note for the film's director arrived after the latter thanked the actor for working in his film on social media. Earlier on Monday, Raghava Lawrence shared a heartwarming note in which he expressed gratitude towards Akshay Kumar for saying yes to such a "tough role." Replying to the director's tweet, Akshay Kumar wrote: "Thank you so much, Lawrence Sir, neither making this film nor doing this role was possible without you."

Raghava Lawrence is making his directorial debut in Bollywood with Laxmii. It is a Hindi remake of the 2011 Tamil film Kanchana that was also directed by him. In Laxmii, Akshay Kumar plays the role of a man possessed by a transgender ghost.

In his note on Monday, Raghava Lawrence wrote: "Through Tamil movie Kanchana, I wanted to convey the pain and struggles of transgenders and the movie received lot of appreciation from transgender's community and the public. Similarly, when Akshay sir is acting in its Hindi remake, I hope the message will reach to a wider audience. Normally, actors won't accept such tough roles but I believe Akshay sir being such a good human being he cares a lot for the society and previously he has given so many good message films... My special thanks to Akshay sir for accepting and doing this role." He also thanked actress Kiara Advani, who features as Akshay Kumar's wife in the film, and producer Tusshar Kapoor.

Thank you so much Lawrence Sir, neither making this film nor doing this role was possible without you https://t.co/V30Ej1V5uC

Laxmii was earlier titled Laxmmi Bomb. The makers changed the title of the film last month.