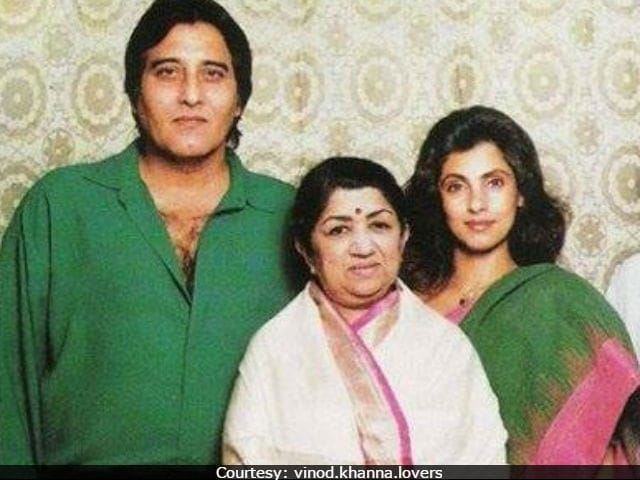 New Delhi: Singer Lata Mangeshkar and veteran actress Asha Parekha have wished a speedy recovery for actor-politician Vinod Khanna, who was admitted to Mumbai's Sir HN Reliance Foundation hospital, due to acute dehydration on March 31. Lata Mangeshkar tweeted about Mr Khanna's well-being through and wrote that he's one of the 'finest actors' of Bollywood. "It's a very unfortunate thing that he is not feeling well. I pray to God that he recovers very fast. He was a very handsome guy... It's sad to know he is not keeping well," Asha Parekh told news agency IANS. The 74-year-old actress has worked with Mr Khanna in films of the seventies like Aan Milo Sajna, Mera Gaon Mera Desh and Main Tulsi Tere Aangan Ki. Here's Lata Mangeshkar's tweet:

My prayers and good wishes are with Shri Vinod Khanna ji for a speedy recovery.
One of the finest artistes of our industry.

Vinod Khanna, 70, has worked in a handful of films in the seventies and the eighties. He is best known for his performance in Mere Apne, Mera Gaon Mera Desh, Imitihaan, Inkaar, Amar Akbar Anthony, Qurbani, Dayavaan and Jurm. In 1999, he received a Filmfare Lifetime Achievement Award for his contribution to the industry. He also featured in television serial Mere Apne, which was produced by Smriti Irani.

Meanwhile, his elder son Akshaye Khanna, who's also an actor told Spotboye, "Dad is doing better." Vinod Khanna has two sons- Akshaye Khanna and Rahul Khanna, from his first marriage. He is now married to Kavita Daftary. They are parents to son, Saakshi and daughter, Shraddha.

Last week, a picture of a frail-looking Mr Khanna made rounds on social media. After the picture went viral, it was believed that Vinod Khanna was suffering was cancer of the bladder. However, later in the evening, the hospital authorities confirmed that the actor's condition is stable and his family has requested to respect their privacy.

Promoted
Listen to the latest songs, only on JioSaavn.com
Vinod Khanna joined BJP in 1997 and is now the MP from Gurdaspur, Punjab.