Kuttey Review: Tabu is supported well by Kumud Mishra. Arjun Kapoor, Radhika Madan and Shardul Bharadwaj go with the flow without missing a beat. Naseeruddin and Konkona do full justice to their limited roles. 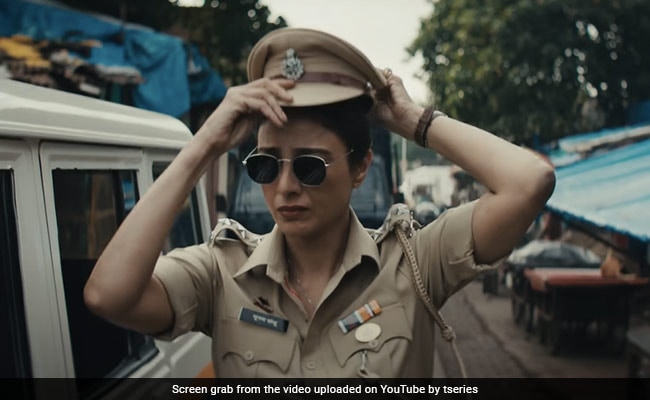 Tabu in a still from Kuttey trailer. (courtesy: YouTube)

Rating: Three stars (out of 5)

Somewhat uneven and unable to shake off its Kaminey hangover - which is inevitable because the twisted, blood-soaked thriller is produced, co-written and scored by Vishal Bhardwaj - Aasmaan Bhardwaj's Kuttey works just fine as a stylised, sly and politically-inflected parable about a world that sits on a ticking time bomb (to be precise, a hand-grenade).

With its frequent time overlaps and sharp perspective shifts, Kuttey occasionally tempers its scorching pace and comes close to being a pertinent commentary on a universe driven askew by human greed, perfidy and desperation. The analogies that it presents for this purpose centres squarely on the behaviour of animals in the wild.

The screenplay, co-written by the first-time director, employs doses of wicked humour and banks upon an ensemble cast that revels in digging their teeth into the dark material to lay bare all the ugliness concealed by the smokescreen of nationhood, the lip-service to law and order and the status-quoist bulwark that people in power seek to protect at all costs.

The question that Kuttey asks, if only tangentially, is: whose nation is this and who are we trying it protect it from? In a brief prelude that creates a context for the free-for-all that follows, an arrested Naxalite asserts when a cop asks her if it is freedom from the nation that she is fighting for: This nation does not belong to you and your master alone, it is ours too.

She continues: Since you choose to call my home a jungle, the laws of the wild apply here: kill or be killed. That is exactly what the characters in this film try to do. With a shrill snarl here and a painful bite there - the punches that Kuttey throws are, admittedly, inconsistent in terms of potency - the film presents a fast-moving tableau of subterfuge and sabotage in which nobody stands a chance of wresting permanent control of the spoils of war.

Sharafat ka zamaana hi nahi raha, saare ke saare kuttey hain yahaan (probity is dead, everybody is a dog here), somebody says, referring in one sweep to the crooks and charlatans, a trio of crooked cops and a pair of young lovers who rampage through a 112-minute film split into four chapters bracketed by a prologue and an epilogue.

The prologue is set in 2003. Laxmi (Konkona Sen Sharma), a Maoist in the custody of a police outpost on the edge of a forest in Maharashtra, gifts a bomb to a policeman (Kumud Mishra), who has been conditioned to faithfully serve his master until the arrested renegade impresses upon him the value of azaadi from unquestioning loyalty to the powers that be. Use the grenade when circumstances push you to the wall, she advises the man in uniform. Her handout comes in the wake of a story that she narrates about a lion, a goat and a dog to illustrate the pros and cons of free-thinking and enslavement.

Thirteen years later, and this is where Chapter 1, titled Sabka Maalik Ek, begins, the bomb in the cop's possession serves as a deterrent on occasions when matters threaten to snowball as the characters careen through maddeningly chaotic situations that trigger unending mayhem and violence.

A van is out to transport a huge amount of cash to ATMs in and around the city of Mumbai. The cop with the hand-grenade and a knavish sub-inspector Gopal Tiwari (Arjun Kapoor), in doing the bidding of an ageing, wheelchair-bound and ruthless crime lord Narayan Khobre (Naseeruddin Shah), have landed in big trouble.

Under suspension, they strike a deal with another police officer, Poonam "Pammi" Sandhu (Tabu), who relates a story about a male scorpion, a frog and a river that separates the arachnid from its partner. The tale gives the film's epilogue its title - Mendhak aur Bichchoo - and leads the plot to the point where the overarching allegory about a world out of joint reaches its logical conclusion.

Pammi and Gopal target the heavily guarded cash van, but, as it transpires, they aren't the only ones who have their eyes on the wads of currency notes that are on the way to different points in the city.

Among the principal characters in Kuttey are Lovely Khobre (Radhika Madan), the mafia don's daughter, and Danish (Shardul Bharadwaj), a factotum of her father's. The duo plots an escape from the constricting world that they are trapped in.

In the deceitful and dangerous environs in which they live, a secret love affair, especially one that dares to defy multiple divides, spells grave danger. Fear, however, is the last thing on the young couple's minds. Like the Maoist in the prelude, the twosome believes that dying for love and liberty is better than living in a world without freedom.

With everybody literally gunning from everybody else, it is only in the fitness of things that the climax of Kuttey pans out in a decrepit edifice in the middle of nowhere, a God-forsaken setting where law enforcers, lovers, lowly henchmen and armed political rebels are herded together and allowed to have a go at each other.

This is what the world has come to and Kuttey goes all out to expose the futility of trust and fealty when all that everyone one has reduced to doing is dodge hails of bullets. Can anybody ever be a winner in unseemly skirmishes such as the ones that Kuttey revolves around? That question is answered loud and clear in virtually scene in the film.

Tabu, who delivers another unblemished performance, is supported admirably well by Kumud Mishra. Arjun Kapoor, Radhika Madan and Shardul Bharadwaj go along with the flow of the wild tale without missing a beat, while Naseeruddin Shah and Konkona Sen Sharma do full justice to their limited roles.

Kuttey is a film that certainly does not bark up the wrong tree.