"Now I think I need a new phrase because thank you is insufficient in this situation," wrote Sana Saeed 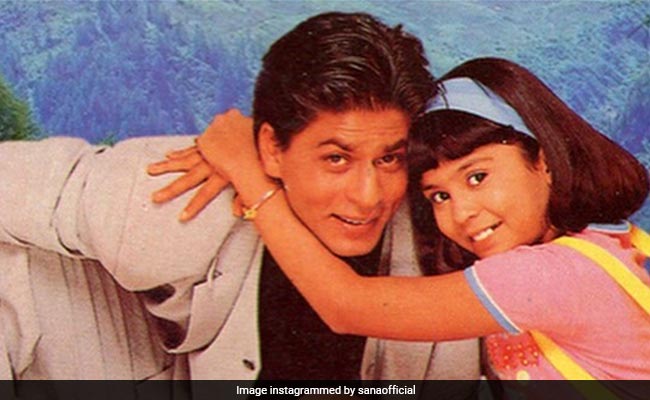 Kuch Kuch Hota Hai clocked 23 years this month and Karan Johar already shared a nostalgic post on social media. Now Sana Saeed, who played Shah Rukh Khan and Rani Mukerji's daughter in the film, shared a set of throwbacks from the film and another throwback picture from the sets of Jhalak Dikhla Jaa, in which she can be seen posing with SRK. Sana Saeed, who currently stays in Los Angeles, sharing the pictures, wrote in her caption: "Thank you. I've said thank you thousands of times in my life. Most of the time I mean it to some degree. There are times when I've said it and felt the gratitude behind the words wholeheartedly, but I don't think I ever understood what those two words truly meant until this very moment. Now I think I need a new phrase because thank you is insufficient in this situation."

She signed off the post with these words: "Like they said it Karan Johar, Dharma Movies. "It's not a movie, it's an emotion. I've felt that more than a few thousand times. #celebratingyoukid #23yearsofkuchkuchhotahai."

Karan Johar marked 23 years of the film like this. He wrote: "23 years of pyaar, dosti and a bunch of memories. This was my first time behind the camera and it ignited an unparalleled love for the cinema in me that continues to drive me till today. Gratitude to the best cast, crew and the audience who continues to pour in the love for this story 23 years on. Thank you".

Kuch Kuch Hota Hai, made on a budget of Rs 10 crore, is said to be the highest-grossing Bollywood film of 1998, which reportedly collected over Rs 100 crore across the globe. The film also featured Sana Saeed, Farida Jalal, late actress Reema Lagoo and Archana Puran Singh.