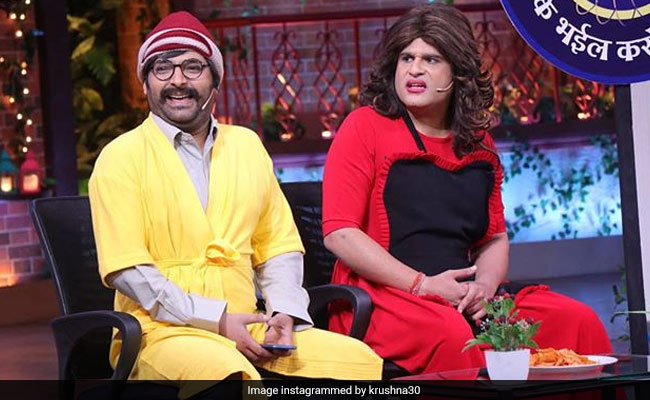 Krushna as Sapna from The Kapil Sharma Show (courtesy krushna30)

Actor-comedian Krushna Abhishek, whose ROFL portrayal of the character Sapna on The Kapil Sharma Show has impressed fans, told ZoomTV in an interview that he has never been compared to Sunil Grover, who quit Kapil's show after an ugly fight. "You won't believe it but no one has compared Sapna to Gutthi till date. In fact, people tell me that 'Jabse tum aaye ho, hum Sunil ko bhul chuke hai'. I have received this compliment several times," the publication quoted Krushna as saying. Sunil Grover resigned from the The Kapil Sharma Show in 2017 because of a fall-out and despite rumours of a reunion, he hasn't worked with the show host since then. His on-screen character Gutthi superseded the popularity of even Kapil Sharma.

In his interview, Krushna Abhishek said he has great respect for Sunil Grover as an actor but their styles are different and hence, his portrayal of Sapna has never been compared to Sunil Grover's Gutthi or Dr Mashoor Gulati: "Sunil is a very good actor. I grade him as a very good actor. He has his own style. I have my own style. Akshay Kumar does a different kind of comedy, Govinda does a different kind of comedy but both are great in their own spaces. I believe that Sunil has a different style and his character doesn't match with Sapna at all."

Krushna Abhishek added that Sunil Grover is hardly ever remembered on sets since he joined the show: "No one talks about him on the show, too. Initially people did, but then we took over."

Sunil Grover has been an integral part of Kapil Sharma's comedy show, whose popularity dipped almost instantly after Sunil Grover's resignation in 2017. After quitting Kapil's show, Sunil Grover made guest appearances as Dr Mashoor Gulati in a few promotional TV shows. He started his own show Kanpur Wale Khuranas in December last year, which failed to make noise at the TRP charts and eventually went off air earlier this year.