Krushna Abhishek Apologises to Tannishtha Chatterjee. What He Says 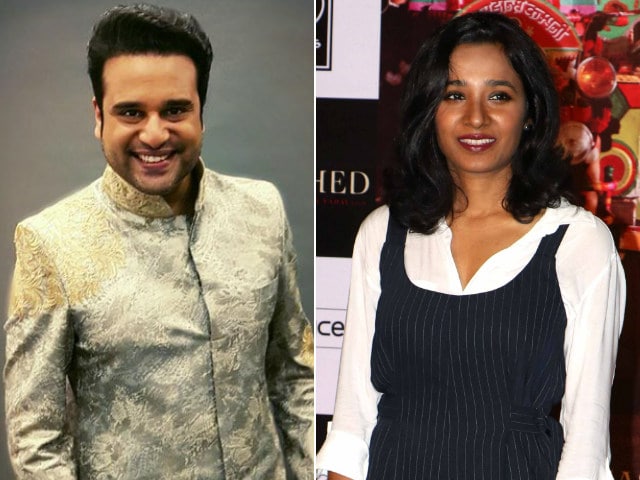 Mumbai: Comedian Krushna Abhishek on Wednesday defended Comedy Nights Bachao, a show that he co-hosts, after Tannishtha Chatterjee rued its "regressive and blatantly racist" ways of finding humour in her dark skin tone. He has, however, apologised to the actress.

Krushna was not present on the sets of the show when Ms Chatterjee was 'roasted' on the comedy show. She was accompanied on the show by her Parched co-stars, actress Radhika Apte and director Leena Yadav on Tuesday. A day after she shot for the show, Ms Chatterjee slammed the format for its approach with a lengthy post on Facebook.

Reacting to it, Krushna told the media: "If she feels offended by something, I apologise from our side. We never want to hurt anyone deliberately. Comedy Nights Bachao is of a roast format. Roast doesn't mean that we say just anything to anyone."

Krushna added: "I had asked Tannishtha, if she has seen the show, she said she doesn't watch TV as such. So, she has no clue about the show. So I took another example and asked her if she had seen AIB Roast? And she hadn't seen that either. I told her that since it's a roast, there will be some leg pulling, but we don't insult. Had we been insulting, the show won't have come so far."

The actress has said that she had some idea of a roast, courtesy show Saturday Night Live, and that with Comedy Nights Bachao, she was looking forward to be 'roasted' as her perception was that a roast is "a celebratory humour at someone's expense" and "a mock counter to a toast".

Pointing out that the only thing they could roast about a dark-skinned actress was "of course her dark skin", she said in a Facebook post: "To my utmost horror, I soon realized that the only quality they found worth roasting about in me was my skin tone. It began with "aap ko jamun bahut pasand hoga zaroor, kitna jamun khaya aapne bachpan se?" And went on in that direction. I could not believe I was sitting in a nationally televised comedy show in 2016 in Mumbai amid such regressive (I can't call it humor), and blatantly racist content."

Krushna said the new second season of Comedy Nights Bachao has been mellowed down due to its film integrations.

"When a show comes, 90 per cent people praise the show, but then 10 per cent say they didn't like it. So maybe she didn't like the format," said the nephew of comedy star Govinda.

Krushna said there are actors who take roasts sportingly.

Promoted
Listen to the latest songs, only on JioSaavn.com
"When Varun Dhawan came for Dilwale, Varun himself came up to me and said that he is very excited and looking forward to the roast. Even Shah Rukh Khan chose to come to our show for Fan. I don't know what hurt Tannishtha, because I wasn't performing then. But I apologise if it has hurt her, though it wasn't a deliberate attempt," he added.