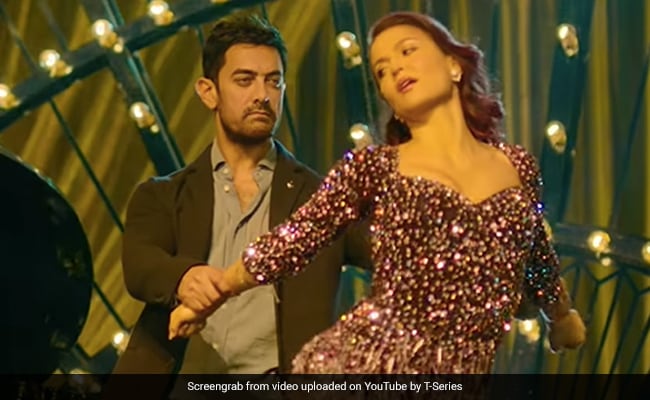 It's finally here! The special song featuring Aamir Khan from his friend Amin Hajee's directorial debut Koi Jaane Na is out now. In the cabaret song titled Har Funn Maula, Aamir Khan can be seen grooving with Elli AvrRam. The track, much before its release, started featuring in headlines for one obvious reason - Aamir Khan. The actor was last seen in the 2018 film Thugs Of Hindostan and the new song is a treat to his fans, who were eagerly waiting to see him onscreen. In Har Funn Maula, Aamir Khan, dressed in a light blue shirt, brown trousers and a blazer, sets the stage on fire with Elli AvrRam, who looks stunning in a purple shimmer dress.

Sharing the song on social media, Aamir Khan thanked Amin Hajee, with whom he has worked together in films like Lagaan and Mangal Pandey: The Rising, and team Koi Jaane Na for a memorable experience. He wrote: "Amin, my friend, you have come a long way since Lagaan. Wishing Bhushan, T-Series and you, all the very best for Koi Jaane Na! Really enjoyed shooting for this song. What an awesome team you have. Ceaser, Bosco, Manoj, Dipankar, Avan, Nanao, Rushi, Manoshi, Ballu, Adele, Tanishk, Vishaal, Zara and above all Elli, who hides all the flaws in my dancing...Hope you all like the song, guys! This film is an exciting (hopefully! Amin don't let us down) suspense thriller Koi Jaane Na and is due for release in theatres on April 2."

Har Funn Maula has been sung by Vishal Dadlani and Zara Khan while Tanishk Bagchi has composed it.

Aamir Khan and Elli shot for the song, choreographed by Bosco-Caesar, for almost 5 days. Koi Jaane Na will open in theatres on April 2 this year.