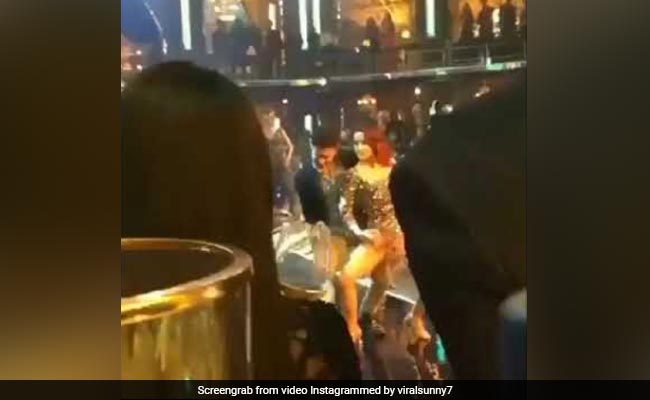 Aamir Khan has been trending on social media since Thursday morning, courtesy a video of him dancing with actress Elli Avram on the sets of Koi Jaane Na, his close friend Amin Hajee's directorial debut. The actor and Amin have worked together in films like Lagaan and Mangal Pandey: The Rising. Aamir Khan flew to Jaipur a few days ago to shoot a special song sequence for his friend's film, starring Kunal Kapoor. In the now-viral clip, Aamir Khan, dressed in a grey shirt, brown trousers and black blazer, can be seen grooving with Elli Avram to a peppy track in what appears to be a bar. She looks stunning in a gold shimmer dress. The video has been leaked from the sets of the film and is now going crazy viral on social media, with several fan clubs resharing it on their respective pages.

About a week ago, Kunal Kapoor posted a picture from the sets of his film and wrote about working with Aamir Khan after 15 years. The duo featured together in the critically-acclaimed 2006 film Rang De Basanti. "Been 15 years since Rang De Basanti and it's every bit as exciting to share screen space with my fav co-actor and someone I hugely admire Aamir Khan for #koijaanena," wrote Kunal in his post.

In terms of work, Aamir Khan's Laal Singh Chaddha will release on Christmas next year. The film is a Hindi remake of the 1994 film Forrest Gump, which starred Tom Hanks in the lead role. Aamir Khan announced the film last year on his birthday.