When Karan Johar asked Ananya "Why did it not materialise?" Ananya said, "ask him" 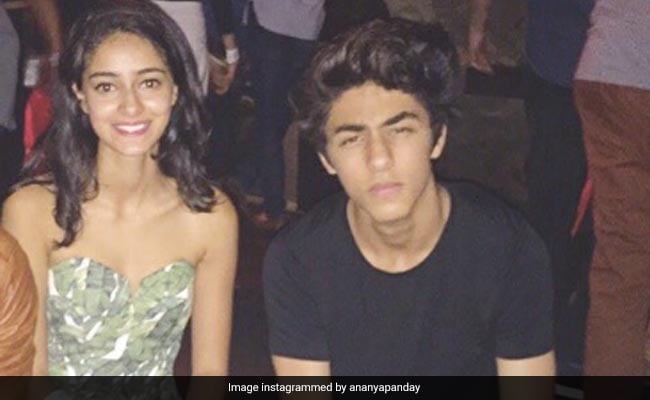 A throwback of Ananya Panday and Aryan Khan. (courtesy: ananyapanday)

Ananya Panday was adorably honest in the new episode of Koffee With Karan 7, in which she shared the couch with Liger co-star Vijay Deverakonda. During the course of the show, Karan Johar asked Ananya about growing up in the "corridors of Mannat" alongside bestfriends Suhana Khan and Shanaya Kapoor (more on that later). KJo also asked if she had a crush on Shah Rukh and Gauri Khan's son Aryan. Ananya said, "Yeah, he is cute. I had a crush on Aryan." When Karan Johar asked her, "Why did it not materialise?" Ananya said "Ask him," referring to Aryan.

Ananya Panday was also asked if their "friendship will survive" given that both Shanaya and Suhana will soon make their Bollywood debuts. To this, Ananya relied "Yes. Because it's not even friendship anymore. I think it's family. It's always been family. I would like to believe that it wouldn't affect our friendship. I think, we all just have a lot of genuine love for each other. Whenever I talk about it, I say it was a collective dream growing up. We all wanted to be actors. We've had so many discussions, and we have played so many acting games. So I think I'll be as happy for Shanaya and Suhana's success as I am for my own. It honestly feels like that".

Shanaya Kapoor (daughter of Maheep and Sanjay Kapoor) will make her Bollywood debut with Dharma Productions' Bedhadak. Suhana Khan (daughter of SRK and Gauri Khan) will step into films with The Archies, co-starring Khushi Kapoor and Agastya Nanda. The film will be directed by Zoya Akhtar.

Ananya Panday, daughter of Chunky and Bhavan Pandey, made her Bollywood debut with Dharma Productions' 2019 film Student Of The Year 2.

Koffee With Karan 7: Did Ananya Panday Just Confirm These Celebs Are Dating?