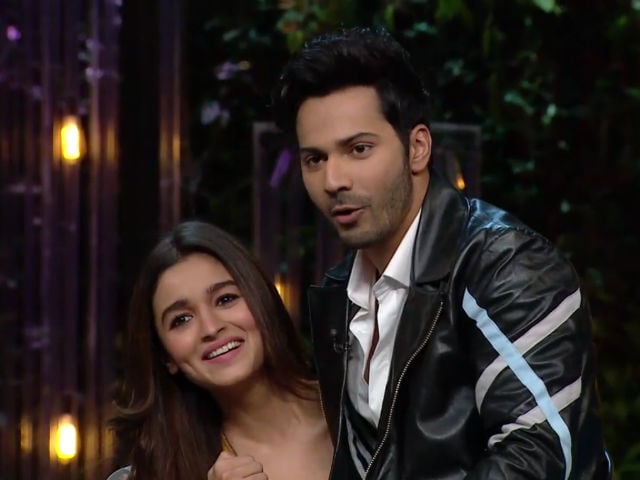 Koffee With Karan 5: Varun Dhawan and Alia Bhatt in a still from the show

New Delhi: Alia Bhatt and Varun Dhawan made our Sunday. Karan Johar introduced his two 'students' on Koffee With Karan 5 as the crazy teenagers of Bollywood. The Badrinath Ki Dulhania co-stars brewed a Koffee that KJo couldn't handle because of their madness. Alia and Varun talked about how they have grown up as actors from Student Of The Year to Badrinath Ki Dulhania. Varun, 29, said that he is very protective about Alia and that she's a very close friend. Alia, 23, said that they bond so well because they share a great passion for their work. Karan was apparently confused about what kind of bond do the stars share. He said sometimes they behave like siblings, sometimes like lovers and sometimes it seems there's a war going on.

Well, whatever it is we totally loved Badri and his dulhania.

Here are some of the highlights from the show: :

How's Varun As A Friend

Varun said that he's is a very protective friend and he has some unique ways of expressing his love. He went on to kiss Karan Johar and said that he does all these things with friends. He also sat on Alia's lap and said, "She's very dear."

Varun revealed that Alia cries a lot. Karan showed us a video, where Alia was crying because the dinner was not according to her taste. Like, really?

Karan asked Varun whether he would marry Natasha, his rumoured girlfriend. And Varun said, "sorry, what?"

However, later he said that he wants to get married and have babies.

When Varun Dhawan imitated Hrithik Roshan, it was a laughter-riot. He said Hrithik's dialogue five times and ended up failing each time.

When Karan asked what does Sidharth Malhotra has that he doesn't. And Varun, Alia and Karan's reaction was priceless. Varun looked at Alia and then a silence prevailed.

Varun Dhawan won all the three rounds of the show and Alia's expression was...

Promoted
Listen to the latest songs, only on JioSaavn.com
At the end, Alia Bhatt and Varun Dhawan 'roasted' the host himself and hosted a 'Koffee Shots With Karan' round. Alia and Varun said that it is on behalf of all the guests whom Karan has 'troubled' during the show.

We will see Rangoon stars Kangana Ranaut and Saif Ali Khan on Koffee With Karan next weekend.