Koffee With Karan 5: Priyanka Chopra Fails A General Knowledge Test. Or Does She? 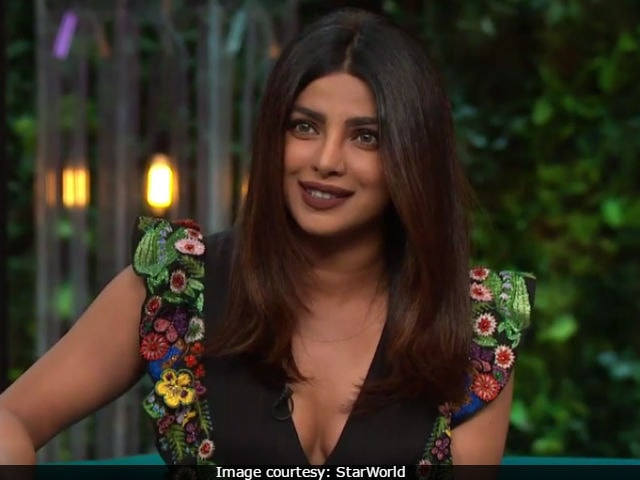 Koffee With Karan 5: Priyanka shot the episode while she was in India (Image courtesy:StarWorldIndia)

New Delhi: Actress Priyanka Chopra will be making a solo appearance on Karan Johar's chat show Koffee With Karan 5 and a glimpse of the episode shows her being quizzed on her general knowledge (Alia Bhatt-style), giggling through a drinking game and making some typically Priyanka comments on her personal life (which is to say, she actually revealed nothing). Priyanka, 34, shot the episode while she was in India on her winter break last month. She spent the new year in Goa, after which she flew back to USA to attend the Golden Globes and then resume work on her TV series Quantico. Priyanka Chopra is now a talk show veteran, having appeared on Jimmy Kimmel and Jimmy Fallon's shows on American TV, and she had the couch on Koffee With Karan to herself.

As revealed by the promo posted by Star World, it seems like Karan Johar's general knowledge questions left Priyanka stumped (at least momentarily) - Alia Bhatt might now be let off the hook for failing to correctly identify the President of India. A drinking game had hilarious results because, you know, who hasn't dissed someone else's outfit at a party? We should add a statutory warning for Karan Johar here - Priyanka is, after all, the woman who beat Fallon in a chicken wing eating contest. Priyanka also says this about her relationship status: "I believe you are single till you are married."

Promoted
Listen to the latest songs, only on JioSaavn.com
Watch the promo of Priyanka Chopra on Koffee With Karan:

From talks of marriage to shots of Koffee, @priyankachopra will be on the couch getting 'personal' with @karanjohar! #KoffeeWithKaranpic.twitter.com/YBJVVtN7ks

Meanwhile, Priyanka Chopra is at home in New York recuperating from a fall on the sets of Quanticowhich put her briefly in hospital. She was treated for concussion after falling and hitting her head on a shoot. In a tweet posted on Sunday, Priyanka thanked well-wishers for their concern and said she hoped to get back to work soon. Priyanka Chopra's Quantico is now in its second season and she's been nominated for her second People's Choice Award for her performance as Alex Parrish, FBI-turned-CIA agent. She makes her Hollywood debut in Dwayne Johnson's Baywatch, coming up later this year, and will also work on two Bollywood films, details of which haven't been revealed.