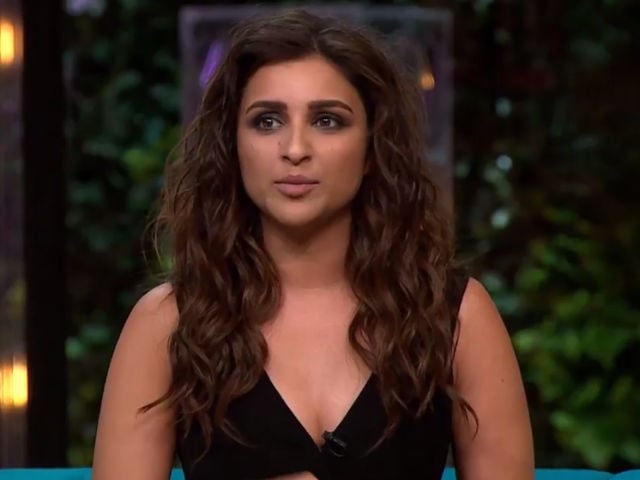 Koffee With Karan 5: Parineeti Chopra in a still from the show

New Delhi: Actress Parineeti Chopra featured on the latest episode of filmmaker Karan Johar's chat show Koffee With Karan 5, which aired on December 4. Parineeti wore a black jumpsuit, which by her own admission is her "sexiest outfit." Her messy hairdo and smoky eye make-up accentuated her look and she seemed more confident than her partner on the episode, actor Aditya Roy Kapur. Parineeti and Aditya have co-starred in Daawat-E-Ishq which tanked at the box office (as they were reminded by KJo innumerable times in the 60 minute-long episode). They were also a part of the Dream Team concert tour, which also included Aditya's Fitoor co-star Katrina Kaif, Varun Dhawan, Alia Bhatt, rapper Badshah and Karan himself.

Aditya and Parineeti were at ease in each other's company and spilled the beans on each other quite a few times. By the end of the episode, it was clearly Parineeti's show through and through. Here are 5 GIFs to prove that.

Karan Johar revealed that Parineeti Chopra is petrified of Katrina Kaif. Parineeti, in her own defence, said that Katrina is extremely studious and strict when it comes to working out. Aditya added that Katrina's way of declining with a straight face also makes her very intimidating. Here's Parineeti telling us how Katrina says no:

Parineeti Chopra is in love with Lisa Haydon's character from Karan Johar's Ae Dil Hai Mushkil. When Karan asked her to play a young girl seeking money from a rich businessman (played by Aditya), she just channeled her inner Lisa Haydon. She did not let go off the character - for a long time:

Parineeti Chopra was quite aggressive (all in fun, of course) while dealing with her Dawat-E-Ishq co-star. For example:

Parineeti Chopra had a lot to say and she managed to bully Aditya Roy Kapur all through the show. She emerged victorious with some very witty one-liners and sometimes with just her expressions. Like here:

GIF courtesy: Star World KJo's Tutorial Of Keeping Up With The Signs

Promoted
Listen to the latest songs, only on JioSaavn.com
Karan Johar's chat show has become a tutorial (of sorts) for celebs. In 2014, Alia Bhatt learnt that her general knowledge was not all that great and the aftermath of this discover is another story (or several) altogether. This time, Parineeti learnt a new sign.

GIF courtesy: Star World Karan Johar's show is currently airing in its fifth season. Next week will beKoffee With Karan's 100th episode, which will feature Salman Khan and his brothers Arbaaz and Sohail. From the 'precap,' we know that Sohail and Arbaaz have many secrets to share. Meanwhile, an episode with Shahid Kapoor and Mira Rajput is also in queue.