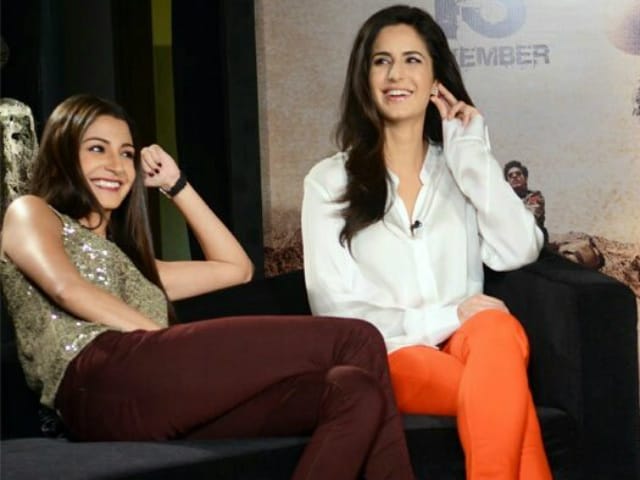 New Delhi: Actresses Katrina Kaif and Anushka Sharma have been friends since they filmed Jab Tak Hai Jaan together in 2012. Now, they're going to be on Karan Johar's chat show Koffee With Karan 5 together - and both stars promoted their episode on social media yesterday. Not for them the directness of simply posting a picture from the sets, like actor Salman Khan did. Katrina and Anushka took a more subtle approach, offering fans an old photo of them chilling on a sofa - presumably from when they were making Jab Tak Hai Jaan (it was Throwback Thursday, after all). Anushka innocuously titled her Instagram post 'Throwback!' but Katrina dropped a heavy hint with her Facebook post.

"Always seem to have fun on couches together," she wrote of herself and Anushka:


Of the 1800 comments the post received was this revealing one from Anushka Sharma: "Haha, true. There is more in store for you guys soon. Hint: Koffee."

Both women have appeared on previous seasons of the show. Katrina Kaif, 33, shared the Koffee couch with Lara Dutta on Season 2 in 2007. Anushka Sharma, 28, has been on Koffee With Karan twice - on Season 3 in 2010 with Ranveer Singh and last season with Anurag Kashyap.

It has not been revealed when the Katrina-Anushka episode will be aired.

Promoted
Listen to the latest songs, only on JioSaavn.com
Koffee With Karan 5 was inaugurated some weeks ago by Shah Rukh Khan, who starred in Jab Tak Hai Jaan with Katrina Kaif and Anushka Sharma. He appeared with his Dear Zindagi co-star Alia Bhatt. This Sunday's episode will feature Aamir Khan and his Dangal co-stars Sanya Malhotra and Fatima Sana Sheikh. Other guests this season have included Twinkle Khanna and Akshay Kumar, Ranveer Singh and Ranbir Kapoor, and Salman Khaan with his brothers Arbaaz and Sohail in wat was the show's 100th episode. Shahid and Mira Kapoor have also recorded their show.