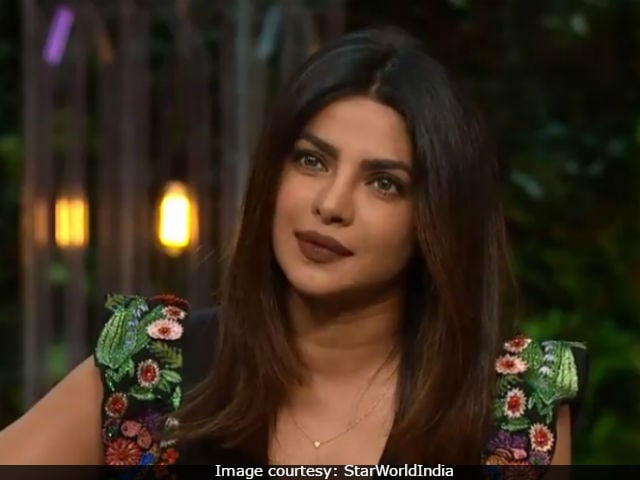 Koffee With Karan 5: Priyanka Chopra's episode was shot while she was in India (Courtesy: StarWorldIndia)

New Delhi: Be generous, so what I am not Ellen DeGeneres. This is how Karan Johar welcomed Priyanka Chopra, his guest on Koffee With Karan. He addressed her as the 'biggest newsmaker' of the times. The conversation began with Karan asking her about her Koffee count. Surprisingly, Priyanka has appeared in all the seasons of the show. The conversation then moved on Priyanka's stardom and her journey so far. The 34-year-old actress said that she never wanted to become an actress and where she is now, she hadn't expected her life to be like this. The episode was shot when Priyanka was in India for her winter break.

Priyanka, who plays Alex Parrish, an FBI agent in the American TV series Quantico spilled the beans on how she got the role and how the auditions happened. "I read 25 scripts for Quantico," said Priyanka. Ummm. And the auditions she said were weird.

Priyanka said that it's impossible for Hollywood actors to fathom the stardom of Indian celebrities. Interestingly, she said that during the shooting, she saw Indians pushing the Americans during a shoot just to take pictures and videos.

On Hollywood star Priyanka said, "I just met him for 10 minutes. Come on!"

Karan asked Priyanka whether she keeps an update of what's happening in Bollywood and who's dating who.

She said, "My mom hates the fact that I don't gossip much."

She further added, "If I started judging everyone there would be lot to talk about myself. That's why I don't talk about others."

If you were thinking that Priyanka doesn't miss Bollywood, you were wrong. She confessed, "I want to do Bollywood films, I'm reading scripts. I want to do Hindi films, I miss dancing, I miss speaking in Hindi."

Well Priyanka, we miss you too!

Karan revealed that the actress has some weird music choice and her playlist contains music of all genres.

Karan- "Priyanka you'll give a disorder to others."

"There's no harm in enjoying it. If you like go ahead otherwise just get out," said Priyanka.

Karan asked her about the difference between boys in US and in India.

She said that there the boys there are on your face while in India, they are still cautious.

Why Priyanka Doesn't Speak About Her Personal Life

Instead of the rapid fire round, Karan played 'Koffee shots with Karan,' where in, they both had to drink coffee shots on the questions asked, if they had ever been in the situation.

She failed to answer three Prime Minister's of India and three Mughal emperors.

She had just three words for all the haters.

Promoted
Listen to the latest songs, only on JioSaavn.com
F, S and Get Lost.

Next up in the show, we will see the father-son duo Jackie Shroff and Tiger Shroff.