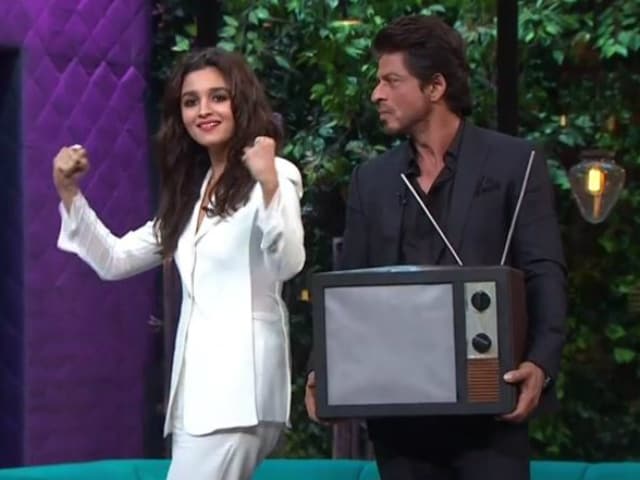 A still from Koffee With Karan.

Shah Rukh, 51 and Alia Bhatt, 23, co-stars of Dear Zindagi were the first guests on Karan’s talk show Koffee With Karan Season 5, which premiered on Sunday. The almost-an-hour-long show will never make you reach out for the remote or yawn. You might want to get up for some popcorn though.

Shah Rukh and Alia opened up about the uncomfortable corners of their lives, their careers and where they stand in life at the moment. Karan, known for his tongue-in-cheek persona, enjoyed every moment with them. So did we.

Here are the Top Ten quotes from the fifth season’s premiere.

Shah Rukh on being asked about why he was not part of Season 4.
"Wanted the TRP's to drop a little of the show last year because I had taken them so high in the first one"

Shah Rukh and Kajol inaugurated Koffee With Karan with its maiden episode on November 19, 2004.

Karan on Shah Rukh as a father:
"He behaves neurotic. He's that character from Darr about his family, about his wife, about his son"

Shah Rukh on working with Alia:
"This learning experience with Alia was more than what I did with you Bhatt saab (filmmaker Mahesh Bhatt, Alia's father)"

Shah Rukh on Alia as an actor:
"Alia is too good too soon. I don't want her to great trapped in just doing great acting without experiencing everything in Indian cinema. If you become too good too soon, you may have inhibitions being bad at times. It's really wonderful to be bad at times"

Alia Bhatt on being affected by the success of other actresses:
"I like to be the best at what I'm doing, But I'm not insecurely competitive"


Shah Rukh Khan's state of mind:
"At rest but not at peace. Peace is boring"

What Shah Rukh said when he was asked to do an impression of news anchor Arnab Goswami:
"Don't make him famous!"

Shah Rukh also referred to a blooper made by Alia on the show's last season, when she mistakenly named Prithviraj Chavan as the President of India instead of Pranab Mukherjee. As a result, Alia has been the subject of several jokes and trolls.

Promoted
Listen to the latest songs, only on JioSaavn.com
But she beat Shah Rukh in the General Knowledge round this time, prompting the actor to say:
"Pranab Mukherjee changed your life"