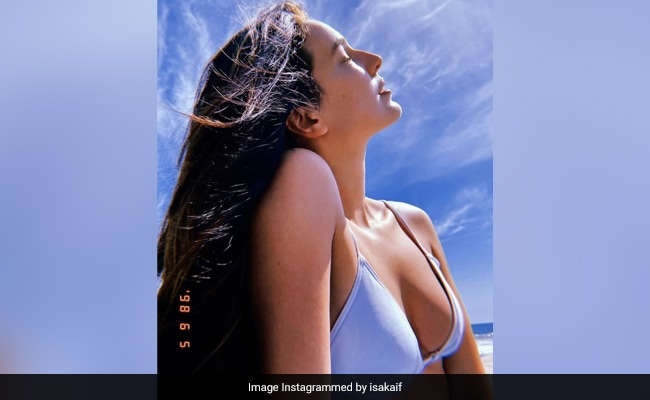 Knock knock, who's there? That's actress-model Isabelle Kaif chilling at the beach. The Time To Dance actress summed up the essence of summer in a single selfie she shared on her Instagram on Monday. Isabelle Kaif, who sends the Internet into a tizzy with her occasional selfies, added one more to the list. Isabelle posted a close up shot of herself, in which she can be seen soaking up the sun at what appears to be a beach - we think we spotted a glimpse of the sea in the backdrop. For sunbathing, Isabelle put on a cute white bikini. She wrote "Sunny day" in her caption with part emoji and part word.

Isabelle Kaif's sun-kissed photo will give you major sea cravings:

Earlier, Isabelle checked into Instagram with this selfie from California:

Isabelle Kaif is one of Katrina Kaif's younger sisters. The Kaif sisters often feature together on Instagram. On New Year, Isabelle Kaif wished her Instafam with photos with Katrina: "Wishing you joy and laughter for 2021," she wrote.

Isabelle made her acting debut with 2014 film Dr Cabbie starring Kunal Nayyar, Adrienne Palicki and Vinay Virman. Isabelle Kaif has two films lined up for release. In the upcoming movie Suswagatam Khushaamadeed, she co-stars with Pulkit Samrat. Isabelle will also be seen in Kwatha, co-which also stars Salman Khan's brother-in-law Aayush Sharma. Isabelle Kaif played the role of a dancer in her film Time To Dance, co-starring with opposite Sooraj Pancholi, who was cast for the role of a street dancer. The movie released earlier this year.