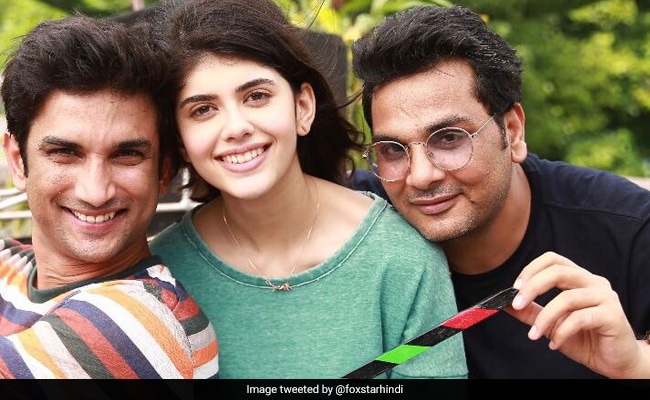 It's not really a poster but we are delighted to have been treated to new Kizie Aur Manny-special photo with the film's cast. Sushant Singh Rajput co-stars with actress Sanjana Sanghi in the Hindi remake of John Green's romantic novel The Fault In Our Stars. Kizie Aur Manny marks the actress' first film with in a full-fledged role. In case you missed it, she had brief but important parts to play in movies such as Rockstar, Hindi Medium and Fukrey Returns. In Rockstar, Sanjana was cast as Ranbir Kapoor's sister. She featured as the young Saba Qamar in last year's Hindu Medium. Kizie Aur Manny will be helmed by casting director Mukesh Chhabra, who is making his debut as a director with the movie.

Earlier this week, details about the Hindi remake were announced with the first poster of the movie. Sharing the poster, this is what the director had to say: "No one compliments each other's craziness like they do." However, the poster did not really reveal Sushant and Sanjana's looks from the movie - all it did was pique our interests with a Rajinikanth mask. Check it out here:

Meanwhile, Hollywood has already adapted The Fault In Our Stars into a movie with the same name, with the main cast comprising Shailene Woodley and Ansel Elgort in the lead roles. Now, for the Hindi version, John Green said he's really looking forward to it. "I want to see this movie more than I have ever wanted to see any movie," he wrote - something which was reciprocated by Sushant Singh Rajput. "It's such a wonderful book John, thanks once again for writing it. While we shoot, the roller coaster is just going up, my friend," he tweeted. (His tweet now appears to have been deleted).

Kizie Aur Manny went on floors earlier this week with the first location being Jamshedpur. Academy Award-winning musician A R Rahman will compose the film's music. Apart from Kizie Aur Manny, Sushant Singh Rajput also has Drive and Kedarnath in the pipeline.