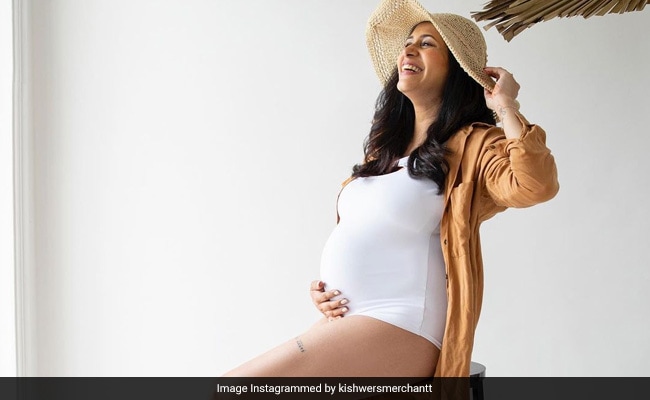 TV actress Kishwer Merchantt shared a new post from her maternity diaries on her Instagram profile on Tuesday. The picture happens to be from a pregnancy photoshoot that she did recently. In the photos, Kishwer can be seen dressed in a white swimsuit. She accessorised her look with an oversized hat. Her smile says it all. The actress' post got a whole lot of love from her friends in the television industry. Aashka Goradia dropped heart-eyed emojis in the comments. Niti Taylor wrote: "Love it." Smriti Khanna added, "Wow! This is lovely." Krystle D'Souza also dropped a heart-eyed emoji in the comments. Kishwer added a white heart emoji to her post and she wrote: "Its a vibe" and accompanied it with the hashtag #sukishkababy.

Meanwhile, her husband Suyyash Rai shared this stunning picture on his profile. Take a look:

Kishwer Merchant announced her pregnancy on social media with a super cute post with her husband and she wrote: "You can now stop asking, 'When are you guys gonna have a baby?' Coming soon ... #august2021 #sukishkababy." Suyyash Rai's way of announcing the pregnancy was quite filmy. He wrote: "Mai tere bacche ka baap banne wala hun, Kishwer! Coming this August."

Suyyash Rai and Kishwer Merchant's love story began on the sets of the 2010 show Pyaar Kii Ye Ek Kahaani. They had a big fat Punjabi wedding on December 16, 2016. The duo participated in the ninth season of reality show Bigg Boss together.