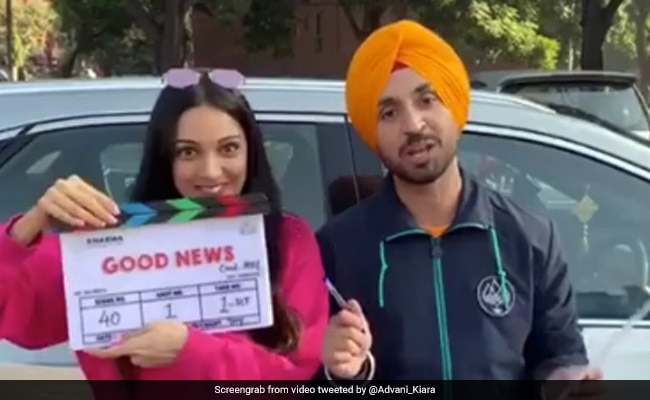 Actors Kiara Advani and Diljit Dosanjh started shooting for their upcoming film Good News, which also stars Kareena Kapoor and Akshay Kumar, on Friday. Kiara and Diljit, who will reportedly play the role of a married couple in the film, announced the news on their respective social media handles. Kiara shared a boomerang video featuring Diljit Dosanjh and herself holding the film's clapboard. "Have you heard the news today? Chill... It's all Good News! Raj Mehta, Diljit Dosanjh and I are missing you Akshay Kumar sir, Kareena Kapoor, Karan Johar and Shashank Khaitan see you all soon!" Kiara captioned the video. Diljit Dosanjh also shared the same video on social media and wrote: "It's a dream come true when you get to work with your favourite production house and an awesome team." Kareena Kapoor and Akshay Kumar will start shooting for the film later.

Here's another video featuring Kiara Advani and Diljit Dosanjh, which has been shared on their respective social media handles.

Kareena Kapoor and Akshay Kumar will headline the cast of Good News, which revolves around a Punjabi married couple trying to have a baby. Kareena and Akshay have previously worked together in films like Ajnabee, Kambakkht Ishq, Aitraaz, Tashaan, Dosti and Bewafaa.

Speaking about Good News in an earlier interview to news agency IANS, Kiara Advani had said: "Good News is my next Hindi film that has been announced. I am very excited and nervous being part of the film because I am working with stalwarts in that film."

Diljit Dosanjh made his Bollywood debut in 2016 film Udta Punjab, which also featured Kareena Kapoor. Good News will be the actor's second collaboration with Kareena Kapoor.