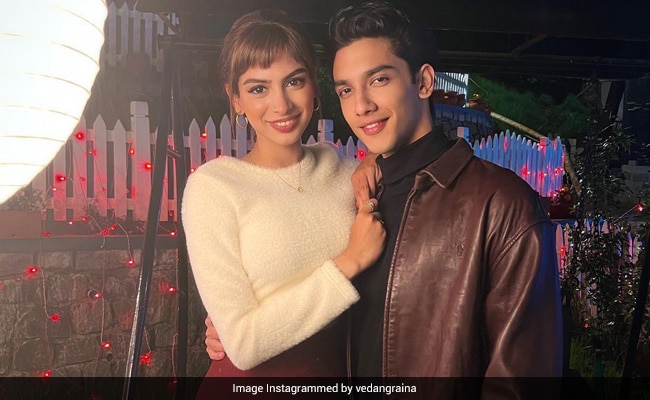 New Delhi: Janhvi Kapoor's sister Khushi Kapoor has been making headlines ever since Zoya Akhtar unveiled the teaser of her upcoming film The Archies. Boney Kapoor's youngest daughter Khushi will be making her Bollywood debut with this movie, co-starring Shah Rukh Khan's daughter Suhana Khan, Amitabh Bachchan's grandson Agastya Nanda and others. Recently, her co-star Vedang Raina shared a post on his Instagram handle with her and Mihir Ahuja. For the uninitiated, the star cast of The Archies is currently shooting in Ooty, Tamil Nadu. In the first picture, Vedang can be seen posing for the camera in a black outfit layered with a brown jacket.

In the next, he is seen enjoying the sunset, while in the third post, he is posing with Khushi Kapoor. The soon-to-be actress is looking pretty in a white top paired with a maroon skirt, flaunting her new look. Seeing the photo, one can say that is from Suhana Khan's birthday celebration. In the last picture, he can be seen posing with co-star Mihir Ahuja.

Here  have a look:

Zoya Akhtar's The Archies stars Khushi Kapoor, Suhana Khan, Agastya Nanda, Vedang Raina, Mihir Ahuja, Yuvraj Menda and Dot. The film will release next year on Netflix. In the film,  Khushi will be playing the character based on Betty Copper, Suhana will be seen as Veronica Lodge, while Agastya will play the character based on Archie Andrews.