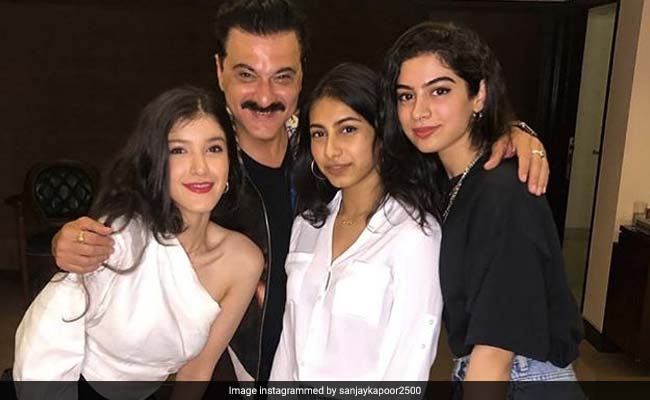 Kapoor cousins - Khushi Kapoor and Shanaya Kapoor - often feature in Sanjay Kapoor's Instagram and his recent post turned out to be one such. Looks like Khushi and Shanaya helped Sanjay Kapoor welcomed the weekend, which he captured in an Instagram post and captioned: "Sanjay and his angels." Shanaya is the daughter of Sanjay and Maheep Kapoor while Khushi is the youngest of Boney Kapoor's four children. In the photo, Shanaya can be seen posing in a white off-shoulder shirt paired with baggy half-and-half pants while Khushi is casually dressed in a black tee and high-rise denims. Take a look at Sanjay Kapoor's post here:

Sanjay and his Angels

Janhvi Kapoor's younger sister Khushi will fly off to the US for pursuing a course at the New York Film Academy. Khushi Kapoor, who harbours Bollywood dreams, also said in a recent talk show that her debut will be a Karan Johar movie and that dad Boney Kapoor will be the one to zero in on her first co-star, reported IANS.

Meanwhile, Shanaya Kapoor's first step in Bollywood will not be as an actress but as assistant director for the biopic of IAF pilot Gunjan Saxena, starring Janhvi Kapoor in the lead role. The Gunjan Saxena biopic is being directed by Sharan Sharma, who has previously assisted Ayan Mukerji on Yeh Jawaani Hai Deewani and Karan Johar on Ae Dil Hai Mushkil.