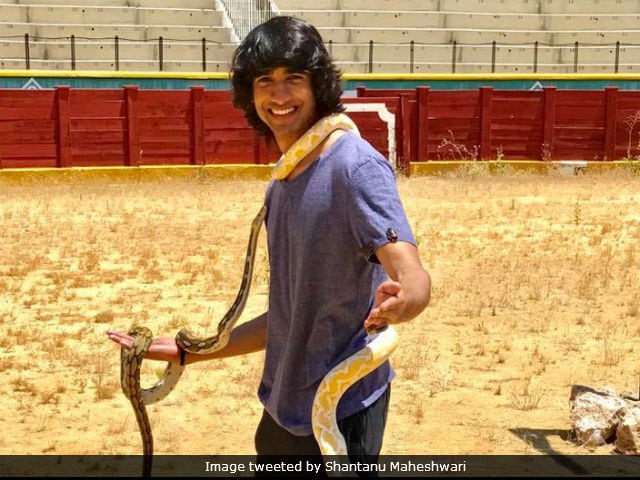 New Delhi: Khatron Ke Khiladi: Pain In Spain season 8 is all set for its finale today. Contestant actors like Hina Khan, Shibani Dandekar, Ravi Dubey, Monica Dogra, Nia Sharma, Rithvik Dhanjani, Geeta Phogat, Shantanu Maheshwari, Karan Wahi and others performed thriller tasks and overcame their fear during the show. Shantanu Maheshwari, who consistently very well performed all the tasks, was put on the first position by other contestants, when asked by host Rohit Shetty. Be it a task related to height or something related to creepy-crawlies, Shantanu did it all (remember the task when Shantanu had to pull out snakes by using his mouth?) Well, last night's semi finale episode put us at the edge of our seats but to our disappointment, Shantanu received the fear-fanda.

Shantanu Maheshwari is a full time dancer and actor who made his debut from a popular show Dil Dosti Dance and later featured on other TV shows like Jhalak Dikhla Jaa.

In last night's episode, Rohit Shetty surprised all contestants by calling their relatives over. Shantanu and Hina were chosen to perform the task. In the task, contestants had to rescue their loved ones from an explosion by assembling a detonator with a crowbar. Somehow, Shantanu was unable to perform the task better than Hina, thus received the fear-fanda and landed up in the danger zone.

The first time Shantanu entered the danger zone was when he aborted a water task.

Promoted
Listen to the latest songs, only on JioSaavn.com
The whole season of Khatron Ke Khiladi was shot in Spain but the final episode will be shot in Mumbai.

Who do you think will win this season of Khatron Ke Khiladi and will receive a Jeep compass? Let us know in the comments.