Just Shweta Tiwari being her stunning self 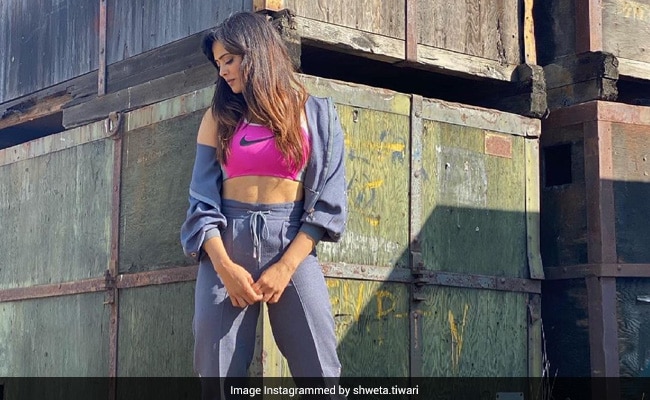 Shweta Tiwari, 40, is making heads turn with her latest pictures that she shared from the sets of Khatron Ke Khiladi, for which she is shooting in Cape Town these days. Shweta, on Wednesday, shared a set of pictures, in which she can be seen sporting an athleisure look and she looks fabulous. She picked a pink crop top, which she paired with grey sweatpants and a matching jacket by Saltz n Sand. We also got a glimpse of Shweta's abs in the picture. She wore pink shoes for the day and gave a variety of poses for the camera. The comments section was filled up with fire and heart emojis from fans.

The TV star has actively been sharing pictures from the sets of the TV show that will be hosted by film director Rohit Shetty. See some of her posts here:

Shweta Tiwari married actor Abhinav Kohli, with whom she has a three-year-old son named Reyansh. Shweta's teenaged daughter Palak also lives with them - she's Shweta's daughter with her former husband Raja Chaudhary. Palak will soon be making her Bollywood debut in the film Rosie: The Safforn Chapter, which is being backed by Bollywood actor Vivek Oberoi.

No Points For Guessing Where Avika Gor's "Happy Place" Is