Keerthy Suresh Played Her Birthday Wish For Vijay On A Violin 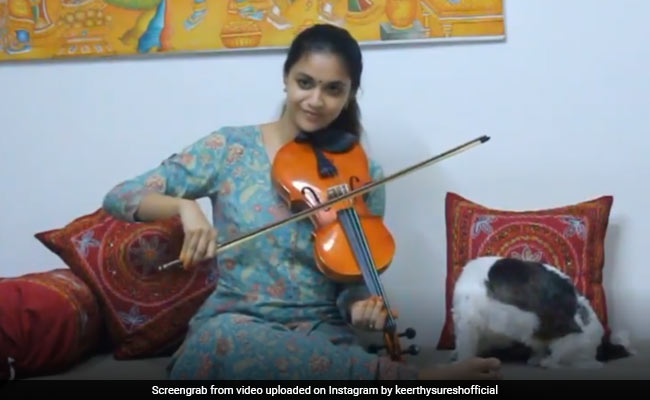 Keerthy Suresh in a still from the video. (courtesy: keerthysureshofficial )

Keerthy Suresh has been trending ever since she posted a musical birthday greeting for director Vijay on his 46th birthday on Monday (June 22). In the now viral video, the National Award winning actress plays the song Kutti Story from Vijay's film Master on a violin. Keerthy, with a smile on her face, got all the notes right. The actress, who has worked with Vijay in films like Sarkar and Bairavaa, wrote in her caption: "Life is very short Nanba, always be happy! Happy Birthday Vijay Sir! A small tribute to you on your birthday, Sir." In no time, Keerthy's post was flooded with comments from fans. Malavika Mohanan wrote: "Whoa! Amazing this is, Keerthy."

Happy Birthday Vijay Sir! A small tribute to you on your birthday sir #HappyBirthdayThalapathyVijay #HBDTHALAPATHYVijay #Master

On World Music Day, Keerthy shared a picture of herself holding a violin and she captioned it: "Utilising this time to brush up my old skills of playing the violin. Happy Music Day." Take a look at the post here:

Keerthy Suresh, who won a National Award for her performance in the Telugu film Mahanati, was last seen in the thriller Penguin, which recently released on Amazon Prime. The actress will next be seen in the Malayalam film Marakkar: Arabikadalinte Simham, featuring Mohanlal. She will also appear in Rajinikanth's Annaatthe, which has been directed by Siruthai Siva.

Keerthy, the daughter of producer G Suresh Kumar and actress Menaka, featured as a child artiste in several films. However, her first lead role was in the 2013 Malayalam film Geethaanjali. She later starred in films like Ring Master, Idhu Enna Maayam, Rajini Murugan, Remo and Nenu Sailaja, to name a few.