Keeping Up With Kriti Sanon: Inside Pics From Her Zambia Holiday

Kriti Sanon and her team struck touristy poses with the Victoria Falls in the backdrop. 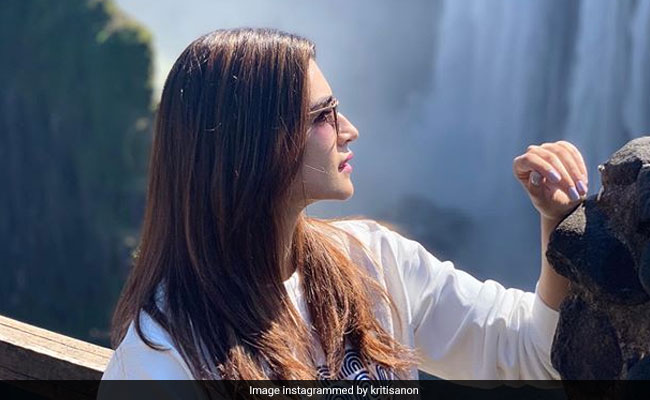 Kriti Sanon is living the best life globetrotting from one continent to another. After a sun and sand beach vacation in Maldives, Kriti Sanon is now in Zambia with her tribe, including her stylist Sukriti Grover and MUA Adrian Jacobs. Kriti Sanon, who is looking forward to the release of Arjun Patiala, is sharing awesome pictures from her tour. In Zambia, Kriti's first main stop was the mighty Victoria Falls. The 28-year-old actress shared pictures of herself looking over the waterfall with a happy face.

Dressed in denims and tee, Kriti and her team struck touristy poses with the Victoria Falls in the backdrop.

The Bareilly Ki Barfi actress had the time of her life in Maldives in June. She shared bright and colourful pictures from the trip.

Hug me like the wind does Healing my heart Calming my soul While it wraps every inch of me. Caressing my hair, It gives me goosebumps As it whispers something That takes my breath away. -Kriti#romanticatheart #poeticsoul

With four films slated for release in 2019 - Luka Chuppi opened in cinemas in March - Kriti Sanon deserves fabulous vacations such as these. Between her Maldives and Zambia vacations, Kriti Sanon was briefly in India to launch the trailer of her next film Arjun Patiala, in which she's paired opposite Diljit Dosanjh. Apart from Arjun Patiala, Kriti Sanon is looking forward to the release of Housefull 4.

She will resume filming Ashutosh Gowariker's Panipat, in which she co-stars with Arjun Kapoor, who is on a separate vacation in New York with his girlfriend Malaika Arora.