Shilpa Shetty Makes It To The Gym Despite A Broken Leg: "Keep Moving No Matter What" 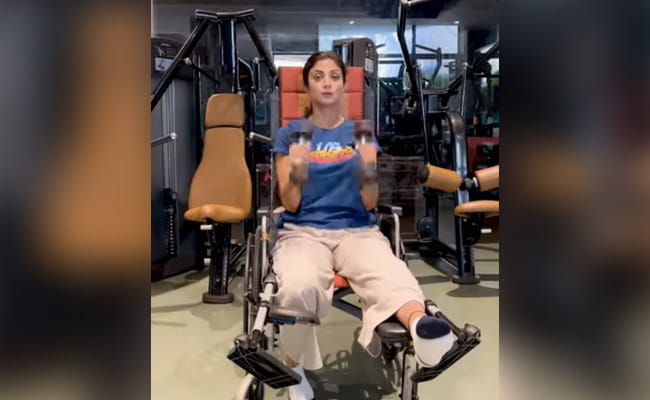 A still from the video. (courtesy: theshilpashetty)

Shilpa Shetty takes her fitness routine seriously. The actress, who is known for her yoga expertise and workout regimens, often shares pictures and videos asking her social media followers to adopt a healthy and disciplined lifestyle. Proving that she indeed walks the talk, Shilpa Shetty has dropped a video of herself from the gym, despite nursing a broken leg. In the caption, Shilpa Shetty said: “'Keep moving. No matter what.' That's the policy I'm living by, especially these past couple of weeks. Putting the time I have to good use, while my leg's going to need time to make a full recovery, decided to ensure I follow a routine that works on strengthening the upper-body.”

Sharing details of her new exercise routine, keeping in mind the leg injury, Shilpa Shetty said: “Today, the routine included Dumbbell Overhead Press for the shoulders & triceps, Half-Range Hammer Curls for the arms and forearms, and Lateral Raises for the shoulders. However, I performed these under the expert supervision of Yashmeen Chauhan. If you're also recovering from an injury, then you must do these under supervision of a qualified and experienced coach, unless you are an experienced exerciser yourself. Happy Monday, guys.”

This is not the first workout video that Shilpa Shetty has posted since she injured her leg on the sets of Rohit Shetty's Indian Police Force. Previously too, Shilpa Shetty shared a video of her performing some simple yoga poses while resting on her wheelchair. Her injured leg with the recovery band is visible in the clip shared with the caption: “Pair toota hai, himmat nahi. Yoga se hi hoga. So, let's do some stretches.”

Speaking about why she was resuming her workout despite the injury, Shilpa Shetty said, “After 10 days of resting in, I realized… no reason is good enough to not stretch. So, even though the injury needs me to take it easy for a few weeks, inactivity can make you rusty. So… I decided to practice the routine of Parvatasana, followed by Utthita Parsvakonasana, and concluded with Bharadvajasana.”

Giving her social media followers valuable advice, the 47-year-old continued, “Anyone who is unable to sit on the floor, or is suffering from knee or back pain can do these stretches on the chair. These asanas are beneficial to strengthen and  improve the flexibility of the spine & the back muscle, and are also helpful for the digestive system. However, the third pose ‘Bharadvajasana (twisting pose)' should be avoided during pregnancy.”

Sharing the news of her injury on social media, Shilpa Shetty had said: “Roll camera action - ‘break a leg!' I took it literally. Out of action for 6 weeks, but I'll be back soon stronger and better. Till then, dua mein yaad rakhiyega. Prayers always work. With gratitude, Shilpa Shetty Kundra."

On the work front, Shilpa Shetty was last seen in the film Nikamma with ‎Abhimanyu Dassani and Shirley Setia.

Hrithik Roshan Denies Reports Of Moving In Together With Girlfriend Saba Azad: "Keep Misinformation Away"