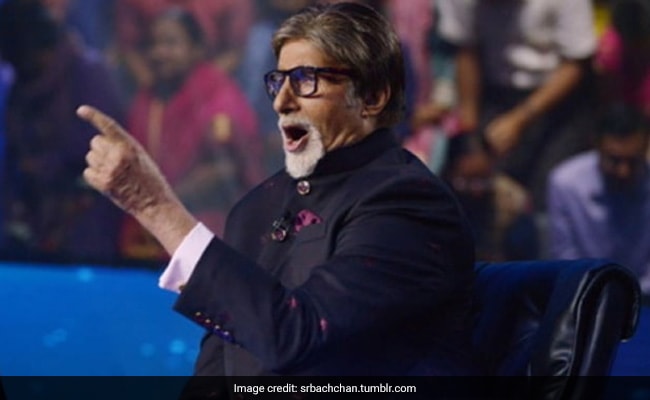 Host Amitabh Bachchan started the Wednesday's episode of the famous quiz show Kaun Banega Crorepati 11 by enlightening the audience about the importance of festivals in India. He then asked the contestants a Fastest Fingers First question and Pooja Jha, a student from Delhi, made it to the hot seat. When Ms Jha couldn't stop crying, Big B hugged her and consoled her. Before starting the quiz, Ms Jha told Big B that she has been trying to make it to the hot seat for a long time and whatever she will win on the show, she will gift the prize money to her mother. She also revealed how her relatives demoralized her after she was selected for the show. To this, Big B praised her abilities and said that now she's on the hot seat, those who demoralized her will hide their faces. He was moved the Ms Jha's inspirational jourey.

Taking the game ahead, Amitabh Bachchan asked Pooja Jha the 10th question. Unable to answer it, Pooja quit the game and took home the prize money of Rs 6,40,000. The next contestant who made it to the hot seat was Kumar Ranjan from West Bengal . Big B had a hearty laugh with Mr Ranjan after hearing his funny anecdotes about his family and his job. He also teased Kumar Ranjan about his wife, which left the audience into splits.

The questions on tonight's episode varied from science to cinema. Here are a few questions asked on the show:

#In the medical profession, what do the initials GP stands for?

#The formula for the relation between the three sides of a right angled triangle is named after which of these scholars?

#Which sports are your watching if you see Jhulan Goswami playing for India?

#According to the Mahabharata, which princess did Arjuna refuse to marry when she was proposed to him by her father?

Follow this space for more updates on Kaun Banega Crorepati 11.