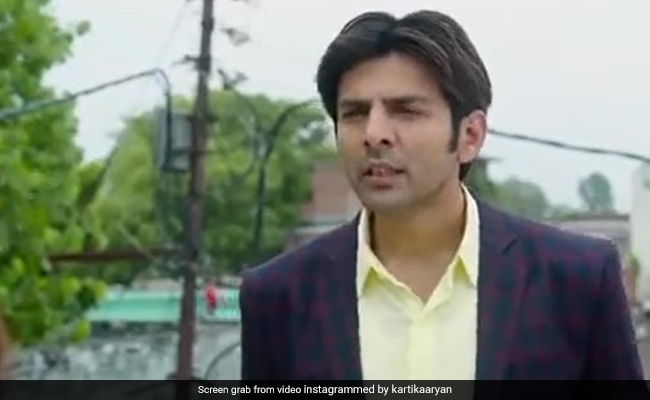 Kartik Aaryan has had a great year. The actor's Bhool Bhulaiyaa 2 was one of the few Bollywood films to make big money at the box office. His recent film Freddy, which was released on OTT, has also been received well by the audience. Now, the actor is celebrating another film of his – Pati Patni Aur Woh – that released three years ago on December 6, 2019. To mark the milestone, Kartik Aaryan shared a portion of the film's trailer that has been cut to show his character laughing. In the caption, Kartik wrote, “Chintu Tyagi ki hansi 3 saal baad bhi waisi ki waisi hai. #3YearsOfPatiPatniAurWoh,” followed by a heart emoji. Actress Bhumi Pednekar replied to the post with a heart emoji. The film features Ananya Panday alongside Bhumi and Kartik.

Kartik Aaryan preceded this with another video from Pati Patni Aur Woh – this time of the song Dheeme Dheeme. In the caption, the star wrote, “Three years to this. #PatiPatniAurWoh #DheemeDheeme. Thank you for all the love.”

A few days ago, Kartik Aaryan shared a video detailing how he prepared for his role as a dentist in Freddy. The clip features him learning how to hold a scalpel from a dentist. He is also seen rehearsing scenes and discussing them with director Shashanka Ghosh. In the caption, he said, “From gaining 14 kgs to going to a clinic and learning skills from a dentist. Becoming #Freddy has been one never-forgettable journey for me...Pushing my boundaries mentally and physically to forget my real self and turn into Freddy for reel. Glad to have worked with an amazing team for this challenging on-screen transformation.”

Before that, Kartik Aaryan had shared his journey of Freddy. He shared a collage of two images – one where the actor is showing his abs and a second after he gained weight for the role. The actor said that playing the character of Freddy gave him sleepless nights. Sharing the post, Kartik wrote, "This is the Origin Story of Freddy which put me under a lot of physical strain and sleepless nights. Seldom comes such opportunities where we get to showcase a completely different side and Freddy is that character."

Kartik Aaryan will be seen next in Satyaprem Ki Katha opposite Kiara Advani.