Karisma Kapoor wrote: "Thank you for giving me the opportunity to share screen space with my all-time favourite Sridevi" 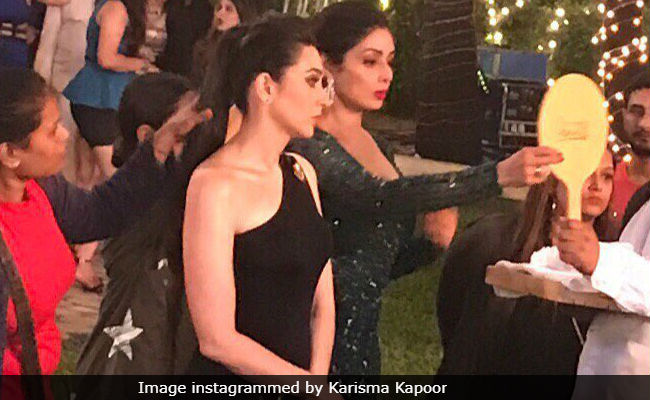 Karisma Kapoor with Sridevi on the sets of Zero. (Image courtesy: Instagram)

On Zero day, actress Karisma Kapoor shared a BTS picture from the film, in which she has a cameo and thanked lead star Shah Rukh Khan and the film's team for 'giving her the opportunity to share screen space' with late actress Sridevi. The Chandni actress appeared as herself in the film for a few minutes along with other celebrities including Deepika Padukone, Rani Mukerji, Kajol and Alia Bhatt. Sridevi had filmed the scene before she died in February 2018 and this cameo in Zero is her last onscreen appearance. However, her last bona fide film was MOM, for which she received Best Actress National Award, posthumously.

"Thank you Shah Rukh Khan and team Zero for giving me the opportunity to share screen space (even if it was for a few minutes) with the legend and my all-time favourite Sridevi. We miss you. #specialmoments #behindthescenes," Karisma captioned this post.

Zero, which is directed by Aanand L Rai, opened in cinemas today to lukewarm reviews. Shah Rukh's last few films - Jab Harry Met Sejal, Fan and Dilwale to name a few - underperformed at the box office. However, trade pundits have predicted a good opening day number for the film. Will he poor reviews damage the film's possible success at the box office?