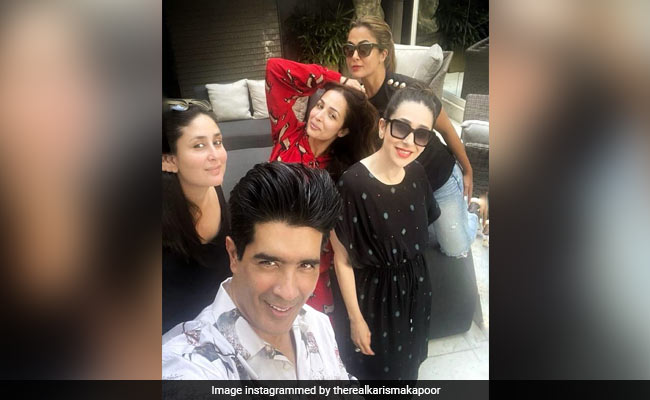 BFFs Kareena Kapoor, Malaika Arora, Karisma Kapoor and Amrita Arora had a blast at fashion designer Manish Malhotra's house party on Tuesday. How we know this? Courtesy, Karisma Kapoor's latest Instagram post. Karisma gave us a glimpse of the fun that she had with her gang by sharing a picture on Instagram. The picture features her and her sister, actress Kareena Kapoor, with their friends Malaika Arora, Amrita Arora and Manish Malhotra. It looks like that the gang enjoyed a rather relaxing get-together as they can all be seen dressed in comfy casual outfits. They met for a lunch at Manish Malhotra's house. Sharing the picture on Instagram, Karisma Kapoor wrote: "Lovely afternoon #finallywithmanu."

Kareena Kapoor also shared the same picture on her Instagram story and wrote: "My Manish and us finally." 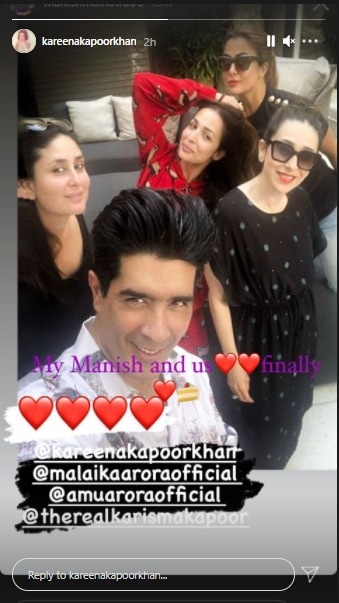 Manish Malhotra also dropped a picture from his get-together "with the fabulous girls."

Amrita Arora, on the other hand, gave us a glimpse of the scrumptious lunch spread that Manish Malhotra put together for his gang. Although Amrita Arora did not share details of the menu, we could spot a sponge cake and pudding among other desserts on the table. In the picture that Amrita shared, we can see Manish Malhotra posing with the table full of the lunch spread. Sharing the picture on her Instagram story, Amrita Arora wrote: "Clearly the sweetest host (post all that dessert)." This is not the first time that the gang is seen having a house party at Manish Malhotra's house. Earlier in March, the fashion designer hosted a party that was attended by Kareena Kapoor, Karisma Kapoor, Saif Ali Khan, Malaika Arora, Amrita Arora, Maheep Kapoor, Seema Khan, Karan Johar and Natasha Poonawalla.