Kareena Kapoor's Sons Taimur And Jeh Are Her "Strength, Pride And World." See Her Post 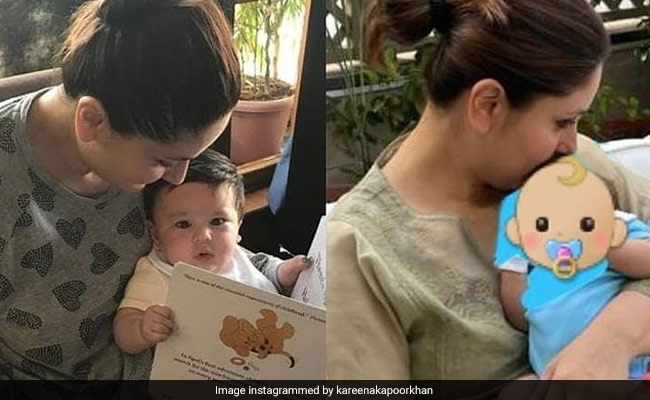 Kareena Kapoor, on Friday, shared a beautiful picture collage featuring herself and her sons Taimur and baby Jeh. In the caption, the actress added that her kids are her "strength, her pride and her world." Kareena Kapoor and Saif Ali Khan, who welcomed Taimur in 2016, became parents to Jeh in February this year. Kareena's latest post features a throwback photo of the actress with Taimur juxtaposed with a recent photo of her with Jeh. "My strength... my pride... my world! My Pregnancy Book wouldn't be possible without my babies. I can't wait for you guys to read about my journey, the experiences, and learnings," she wrote. The 40-year-old actress will soon launch her new book titled Kareena Kapoor Khan's Pregnancy Bible which is about her both pregnancy experiences.

Kareena Kapoor has been sharing snippets of her pregnancy diaries on social media. Recently, she shared how she "was a pizza-guzzling girl" when she was pregnant. Kareena, who loves pizza, shared a video of herself "demolishing one pizza after another" and wrote: "Here's an interesting thing you guys 'knead' to know about me. When I was pregnant... I was a pizza-guzzling girl who would demolish one pizza after another and my friends would just watch in disbelief. I've captured this and more of my pregnancy journey in my book. PS. I still am a HUGE pizza aficionadough, #AsYouCanSee."

A few months ago, Kareena Kapoor sent the Internet into a tizzy by sharing a picture of little Taimur holding baby Jeh in his arms and looking adorably at the camera. Here's the photo we are talking about:

Kareena Kapoor will next be seen in Karan Johar's period drama Takht and Lal Singh Chaddha, in which she will share screen space with Aamir Khan.