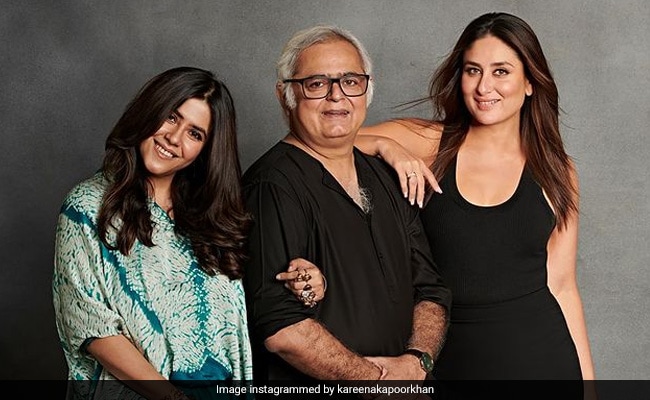 Actress Kareena Kapoor, who recently launched her first book as an author, has added another feather to her hat - she is also a producer now. Her first film will be jointly produced by Hansal Mehta and Ekta Kapoor. Announcing her first production venture, Kareena Kapoor shared a picture of herself, Ekta Kapoor and Hansal Mehta and wrote: "New beginnings." Other than producing the yet-to-be-titled film, Kareena will also star in it. The film is based in the UK and is inspired by true incidents. Other details about the film have been kept under wraps for now.

Filmmaker Hansal Mehta, who is known for directing critically-acclaimed movies such as CityLights, Aligarh, Omerta and Shahid, also announced his new project on social media. He shared the same photograph of himself, Kareena and Ekta Kapoor and wrote: "They are incredible women and I'm thrilled to be working with them (and to be in the same frame as them) Looking forward to this journey."

Ekta Kapoor's caption for the film announcement post read: "Collaborating with some of the finest and most talented people Kareena Kapoor and Hansal Mehta ... can't wait to begin this exciting journey together!"

Kareena Kapoor will next be seen in Karan Johar's period drama Takht and Aamir Khan's Laal Singh Chaddha. Lal Singh Chaddha is slated to release on Christmas this year.

Kareena Kapoor is married to actor Saif Ali Khan. The couple welcomed their second child Jeh in February this year. The couple are already parents to a 4-year-old son named Taimur.

This new film will mark Kareena Kapoor's first project after the birth of son Jeh.