Kareena Kapoor Returns To The Ramp 2 Months After Giving Birth 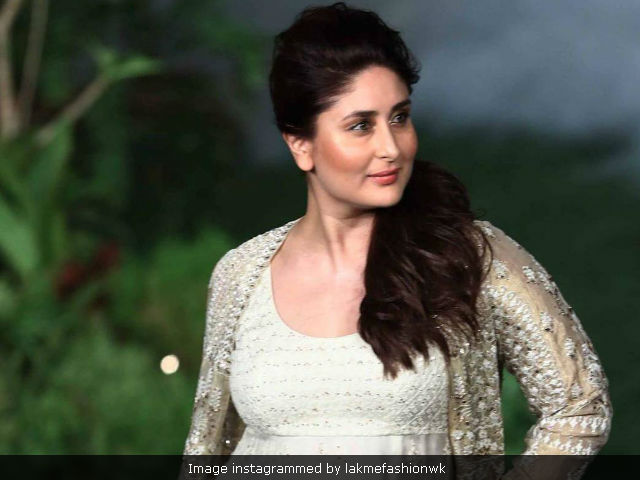 New Delhi: Actress Kareena Kapoor Khan brought down the curtains at the Lakme Fashion Week on Sunday with a bang at designer Anita Dongre's show. Two months after she gave birth to her first son, Tamiur Ali Khan Patudi, Kareena Kapoor walked the ramp for Anita Dongre as showstopper on February 5. She was a vision in white. The 36-year-old new mother looked stunning in 'Alchemy By Anita Dongre' collection on the last day of the prestigious and year-long awaited Lakme Fashion Week. Anita designed a white embroidered sheer dress for Kareena and teamed it with a heavily embellished overall which complemented Kareena's graceful style.

Take a look at Kareena Kapoor Khan, the Begum of fashion:

The moment when Kareena walked the ramp with Anita Dongre.

Anita shared a selfie with her showstopper after the show.

Promoted
Listen to the latest songs, only on JioSaavn.com
Last month, when Kareena's name was announced as the showstopper for the finale event, Kareena had said: "It's always a pleasure representing Lakme at the most spectacular Grand Finale," reported news agency IANS.

Kareena Kapoor married actor Saif Ali Khan, with whom she's worked in films like Tashan, Kurbaan and Agent Vinod, in 2012. Tamiur Ali Khan, born on December 20, 2016, is Saif and Kareena's first child together. Saif, who is divorced from actress Amrita Singh, has a daughter and son, named Sara and Ibrahim.