Kareena Kapoor Reminds Saif Ali Khan About Herself As He Lists His Favourite Actresses: "Your Wife," She Said 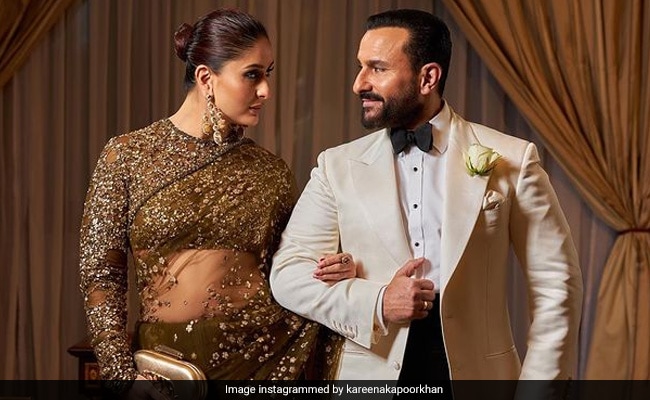 Kareena Kapoor and Saif Ali Khan are creating a heavy buzz as they walked the red carpet at the Red Sea Film Fest in Jeddah on Friday. Now, a video is going on the Internet that shows them answering some questions before joining the Women in Cinema at the festival. However, what grabbed our attention was their cute moment when Kareena reminded Saif about herself as he listed his favourite actresses. In the viral video, Saif can be heard saying, "Cinema is empty without women for a start. When you think of cinema you think of so many important ladies, my favourite actresses from all the way back from Marlene Dietrich to Audrey Hepburn to Charlize Theron..." Kareena then intervenes and says, "to your wife." On hearing this, Saif quickly adds, "and to my beautiful wife." Kareena then laughs.

Saif Ali Khan also added, "My mum (Sharmila Tagore), her first movie (Apur Sansar) was with Satyajit Ray when she was 16. So I think feminine sensitivity and aggression, that whole aspect of nature is what women in cinema mean to me."

Click here to check out the viral video from the event.

Saif Ali Khan and Kareena Kapoor were among the many celebs who attended the Red Sea Film Festival. On Saturday, Kareena shared stunning pictures of herself in a shimmery golden saree with statement earrings. The post also featured an adorable picture of her with Saif, who looks dapper in a white suit set. In the caption, she wrote, "Thank you Red Sea international film festival for a fantastic evening."

Here have a look at more pictures from Kareena  and Saif's Jeddah diaries:

On the work front, Kareena Kapoor will be next seen in Sujoy Ghosh's The Devotion Of Suspect X.