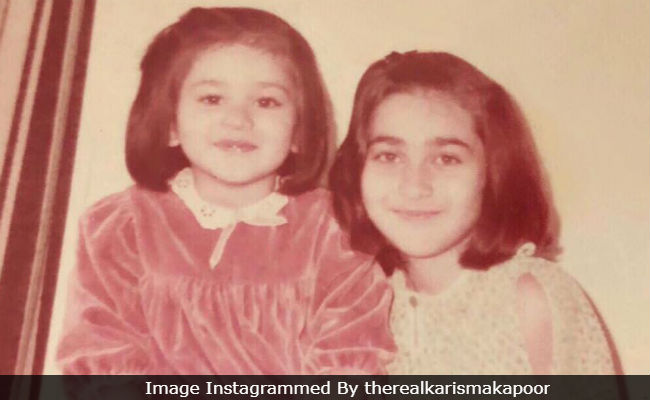 You definitely don't need to wait till Thursday to post some pure throwback pictures. Follow what actress Karisma Kapoor just did. She shared a cute throwback picture with sister Kareena Kapoor and we can't thank her enough. In the photo, little Kareena, dressed in what appears to be a pink frock, is seen sitting beside Karisma, who wears a white dress. The Kapoor sisters have similar hairstyles and are all smiles for the camera. They look so, so adorable. "Always twinning, since forever," Karisma captioned her post, adding hashtags like 'Wonder Wednesday,' 'Memories' and 'My Rock.' Former actress Amrita Arora, Kareena's best friend, has posted a couple of heart emoticons, on their picture.

(Aren't they looking simply adorable? Thank you for the picture, Karisma).

Karisma, 44, and Kareena Kapoor, 38, are children of veteran actors Randhir Kapoor and Babita. Karisma debuted in the film industry in the early Nineties while Kareena entered a decade later.

Karisma is divorced from businessman Sunjay Kapoor, with whom she has two children - daughter Samiera and son Kiaan. Kareena is married to actor Saif Ali Khan and the couple are together parents to son Taimur, who'll turn two this December.

On the work front, Kareena was last seen in Veere Di Wedding. She has the multi-starred Takht and Good News with Akshay Kumar in the pipeline. Meanwhile, Karisma's last film as a lead actress was 2012's Dangerous Ishhq. She will next be seen in a cameo in Shah Rukh Khan's Zero, which is expected to hit the screens in December.