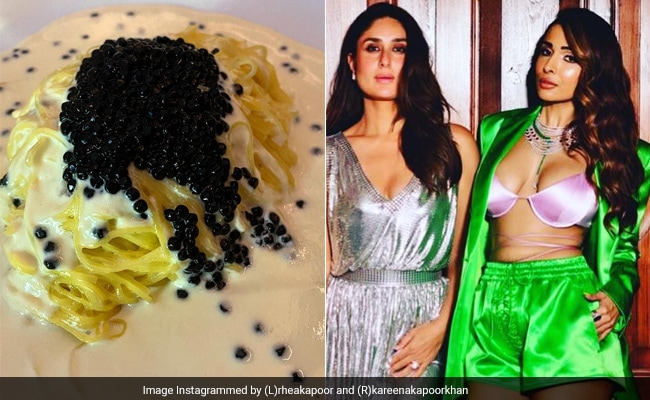 Rhea Kapoor recently spent 48 hours in Paris and a large part of the two days involved her relishing some tasty food. The producer visited the French capital with her husband Karan Boolani as well as her sister and soon-to-be-mom Sonam Kapoor to celebrate Sonam's birthday. On Tuesday, Rhea dropped a series of pictures and videos dedicated largely to her gastronomic adventures. From caviar and champagne to pasta and chocolate mousse, Rhea lived her best foodie life on the trip, the post reveals. Sharing the pictures, Rhea Kapoor said, “Ufff Paris. Even last minute and for 48 hours you're just over the top enough to make me a romantic again.”

And, it looks like Rhea Kapoor's food post has left bestie Kareena Kapoor a tad bit envious. Reacting to the post, Kareena said, “I want Chez l'Ami Louis food, uffffff,” she said, referring to the popular restaurant in Paris. To this, Rhea replied, “Then you'll say send Paris list.”

In a separate comment, Kareena Kapoor addressed Rhea Kapoor and said, “And you are only eating…Sonam can, you can't!” To this, Rhea said, “You and Sunita Kapoor are only leaping bro.” For the unversed, Sunita Kapoor is Anil Kapoor's wife and Sonam and Rhea's mother. Rhea is presumably referring to the fact that Sunita Kapoor too replied to the post saying, “Only food.”

In a post shared over the weekend, Rhea Kapoor dropped more pictures from Paris and this time the Eiffel Tower and Karan Boolani got a spot along with several images of – you guessed it, right – food.

“Butter and love, the perfect birthday present for any pregnant lady! Paris with the fam,” Rhea Kapoor said in the caption.

Here's another set of pictures – this time from London – of Rhea with Sonam, who is flaunting her pregnancy bump. With the geotag on the post pointing to the famous Carmel Restaurant, Rhea said, “Rock up to the best meal of the trip like…(So far).”

Last week, on the occasion of Sonam Kapoor's birthday, Rhea Kapoor shared two lovely images. In the caption, she wrote, “Happy birthday to the best. The original. The kindest. The iconic. The completely nuts. The most loving. My favourite human, ultimate sister and soulmate.”

Replying to the post, Sonam Kapoor said, “I love you…God gave me a sister to make me whole,” with a heart emoji.

Rhea Kapoor and Sonam Kapoor have collaborated on projects such as Aisha, Khoobsurat, and Veere Di Wedding.