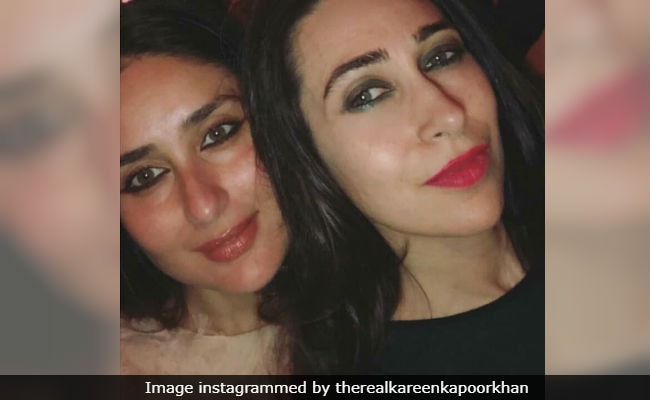 It was one helluva night for all sports enthusiasts as India vs England first T20 international match coincided with England vs Colombia FIFA World Cup on Tuesday night. Guess who could not avoid the "game fever"? Yes, Karisma and Kareena Kapoor. Karisma, who has been vacationing with Kareena and other family members in London (for almost a month now), shared snippets from their entertaining game night on her Instagram story, which were in turn shared by fan clubs. We're guessing that they were happy about India winning the first match of the series. The Kapoor sisters looked fabulous - obvious much?

Check out the pictures shared by the fans clubs:

Kareena Kapoor took off for London a few days after the release of Veere Di Wedding, her first film after the birth of her son Taimur. As Veere Di Wedding made money at the box office, Kareena Kapoor spent her vacation time with husband Saif Ali Khan and their son Taimur. Karisma Kapoor and her children Sameira and Kiaan joined them too. Initially, Kareena and Karisma were holidaying with Sonam Kapoor and they were briefly joined by Amrita Arora.

Together the gang celebrated Sonam and Karisma's birthdays on June 9 and June 25, respectively, but their latest posts suggest that they've parted ways for now.

Here are some pictures from their London vacation diaries.

After Veere Di Wedding, Kareena Kapoor hasn't announced her next project yet. During the film's promotions she conveyed to her fans that she'll make one film a year to balance work and her personal life. Kareena also said that she and Saif have divided their work calendar in a way that Taimur has at least one parent at home at all times.

Ranveer Singh On Deepika Padukone: "I Would Have Been Lost" Without Her