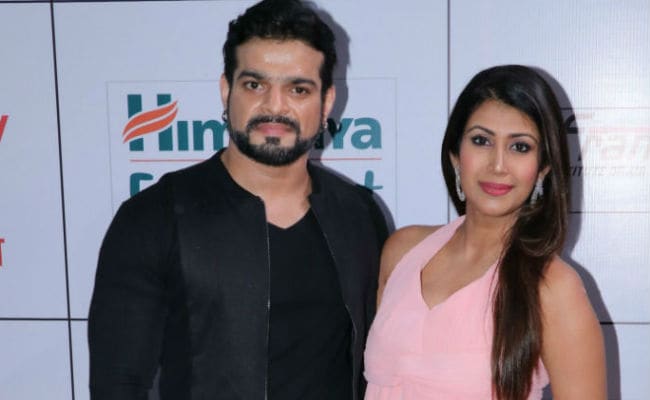 Karan Patel and Ankita Bhargava at an award show in Mumbai.

New Delhi: Actor Karan Patel's wife Ankita Bhargava suffered a miscarriage, her father Abhay Bhargava told Times Of India. Mr Bhargava just confirmed the news and informed that Ankita is "doing better" but he refused to give details. The accident reportedly happened a day after a television award show was held in Mumbai, which Ankita attended with Karan Patel. The couple was expecting the arrival of their first child in November. Karan Patel had announced the pregnancy in May. Karan Patel, who plays the male lead in Yeh Hai Mohabbatein, and Ankita Bhargava have been married for three years now.

Karan Patel and Ankita Bhargava met at a party at Abhay Bhargava's home. Abhay Bhargava plays Karan Patel's onscreen father-in-law in Yeh Hai Mohabbatein. It was their co-star Aly Goni (Karen Patel's small screen brother), who suggested that Karan and Ankita would be a perfect match. "Aly spoke to Karan's parents, who saw Ankita's picture and within an hour they got back to us saying they wanted her to be their daughter-in-law. I am aware of Karan's past but I know that his good qualities outdo the bad ones, so I'm happy," Mr Bhargava earlier told news agency IANS.

Karan Pate debuted on the small screen in Ekta Kapoor's Kahani Ghar Ghar Ki, in which he featured for eight years. He has also featured in K-Soaps like Kasamh Se, Karam Apna Apna, Kasturi and Kkavyanjali. He currently plays the role of Raman Bhalla in Yeh Hai Mohabbatein, co-starring Divyanka Tripathi.

Ankita is also an actress and she has starred in TV shows like Dekha Ek Khwaab and Reporters.