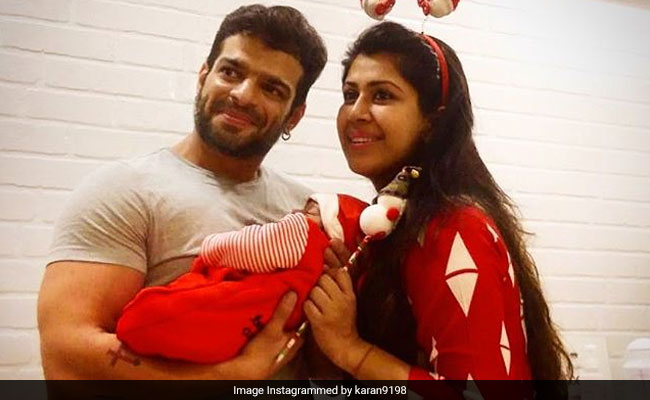 Celeb couple Karan Patel and Ankita Bhargava shared the first picture of their baby girl Mehr on Christmas and it is the best possible gift we could have asked for. The television actor on Wednesday posted a picture, in which he can be seen holding his daughter in his arms with his wife standing by his side. Although the little munchkin's face isn't entirely visible in the photo, she still looks adorable in a cute little Santa Claus dress. Sharing the picture on Instagram, Karan Patel wished his fans and wrote: "Merry Christmas" and accompanied it with an adorable hashtag - #rabdimehr. Check out his latest Christmas special Instagram post:

Karan Patel and Ankita Bhargava welcomed Mehr on December 20. Karan announced the news on social media and shared a picture that has: "It's a girl and we call her Mehr Karan Patel. Loving parents, Karan and Ankita" written on it. He captioned the post: "All your blessings made our world beautiful, a heartfelt thankyou to all our well-wishers... #RabDiMehr."

All your blessings made our world beautiful, a heartfelt thankyou to all our well wishers .... #RabbDiMehr

Karan Patel and Ankita Bhargava got married in May 2015. On the work front, Karan Patel is best known for his performance in recently-concluded TV show Yeh Hai Mohabbatein. He played the role of Raman Bhalla. Karan has also participated in adventure-based reality show - Khatron Ke Khiladi Season 10. Ankita, on the other hand, has been part of shows such as Sanjivani, Kasautii Zindagii Kay, Yeh Pyar Na Hoga Kam, Mrs. Tendulkar and Dekha Ek Khwaab to name a few.