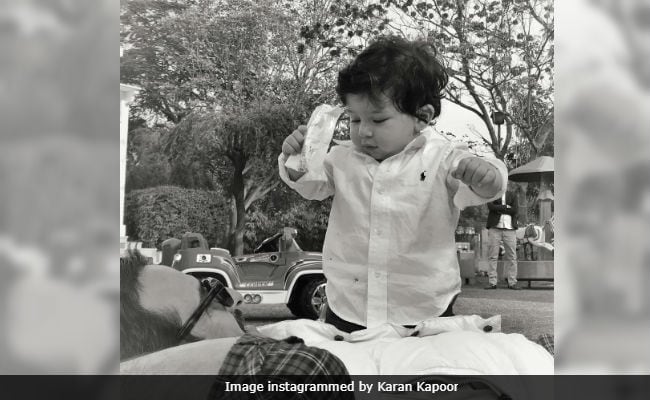 New Delhi: Baby Taimur's latest from his first birthday party last month will clear off your early morning blues. The young nawab was photographed playing with his father Saif Ali Khan by Karan Kapoor, who was one of the invitees. Karan Kapoor, son of actor Shashi Kapoor, had earlier shared some pictures of the birthday party held in Saif's ancestral Pataudi Palace in December. In the photo, Taimur, dressed in shirt and trousers seems up for some mischief while his father was relaxing. Taimur is Saif Ali Khan's son with his second wife Kareena Kapoor.

Promoted
Listen to the latest songs, only on JioSaavn.com
Saif and Kareena are currently busy with their respective projects. Kareena's first film post-pregnancy, Veere Di Wedding, is slated for June 1 release. Veere Di Wedding also stars Sonam Kapoor and Swara Bhaskar and it is produced by Rhea Kapoor. Saif was last seen in Kaalakaandi and he will be next seen in Baazaar, directed by Gauravv K Chawla.

Karan Kapoor, the Eighties' heartthrob, is a critically acclaimed photographer. He started career with modelling and followed it up with films. He starred in a handful films such as 36 Chowringhee Lane, Sultanat and Loha before he became a full-fledged photographer.