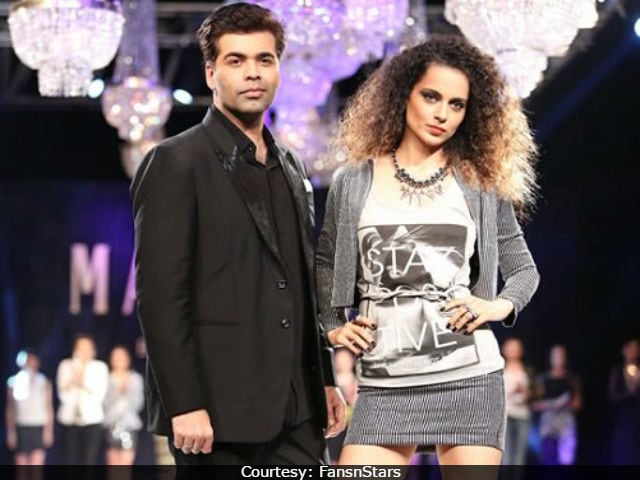 New Delhi: Filmmaker and new father Karan Johar waited a while to deliver burn for burn - and what a burn it is. At an event in London over the weekend, he addressed the Koffee With Karan episode in which actress Kangana Ranaut 'gave it off to him,' as he described it. Asked about the 29-year-old actress' accusation of him being the 'flag bearer of nepotism' in Bollywood, Karan Johar said "I am done with Kangana playing the woman and victim card. I am done. You cannot be this victim at every given point of time who has a sad story to tell about how you've been terrorised by the bad film industry. Leave it," said said Mr Johar, to applause. He was speaking at a pre-event for the LSE-SU India Forum on March 4 - the conversation is believed to be with film critic Anupama Chopra, who has her back to the camera.

'She deserves all the national awards, but I'm done with Kangana playing the victim card...' @karanjohar#KaranJoharpic.twitter.com/85SyK1EZr0

Some weeks ago, Kangana Ranaut appeared on Karan Johar's chat show Koffee With Karan with her Rangoon co-star Saif Ali Khan. She attacked Mr Johar, saying, "Karan Johar is a star and he has given me a lot of unnecessary attitude...In my biopic, if ever it's made, you'll play that stereotypical Bollywood biggie, who is like you know...very snooty and completely intolerant towards outsiders, flag bearer of nepotism, the movie mafia."

As he notes in the video above, Mr Johar was 'gracious enough to keep all' of what Ms Ranaut said. In an interview with NDTV Spotlight earlier, the director compared his being pummeled by Kangana Ranaut on the show to the war drama The Ghazi Attack.

Promoted
Listen to the latest songs, only on JioSaavn.com
Rangoon, which also co-starred Shahid Kapoor, released two Fridays ago and while it has received mostly good reviews, the film's box office performance has been sub-par.